BERLIN Recycling Volleys is taking on the 2012 defending champion Zenit KAZAN in the Playoffs 12 of the 2013 CEV Volleyball Champions League this Wednesday. Peter Fissenewert and Kaweh Niroomand commented the game. 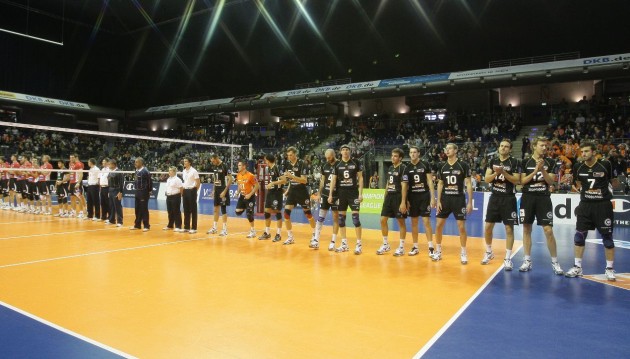 With the society of friends of the German Heart Institute being the presenting partner of the day, the 2012 German national champion dedicates the club’s Champions League highlight of this season to charity purposes. The German Heart Institute Berlin (Deutsches Herzzentrum Berlin) is an internationally renowned high-performance hospital for the treatment of cardiovascular and thoracic diseases as well as for heart and lung transplantation. Because of the engagement of the charity organization the German Heart Institute was able to conduct life-saving surgery on people from countries from all over the world who usually could not have afforded such an operation.

“Being the presenter of the Champions League match of BERLIN on behalf of our charity organization is a great opportunity, pleasure and honor for us” the society’s chairman Professor Dr. Peter Fissenewert says. “Sport and charity, that’s a great match. We hope to find many new supporters here with the help of BERLIN Recycling Volleys.” With this campaign the side of BERLIN keeps the promise made by Kaweh Niroomand who addressed the society’s chairman at another charity event offering support from the side of the club.

For the team of BERLIN the up-coming match against the clear-cut favorite Zenit KAZAN will go down in club history. Chosen the “match of the week” by laola1.tv the host will experience unparalleled media coverage. “We are glad we reached our goal and made it to the Playoffs after seven years of absence in Europe’s most elitist competition”, Kaweh Niroomand says. “We’re proud to be the only German representative still competing in the Champions League. And being selected as ‘match of the week’ by laola1.tv is a great honor for us and we’re delighted that so many people all over the world will be able to watch us playing on Wednesday.”

For more news from this competition click on CEV CL 2013 M.