CEV CC F: Romania’s rookie C.S.M. BUCURESTI to fire back after away defeat in Germany

C.S.M. BUCURESTI is Romania’s sole club still in contention in this year’s European Cups and this coming Wednesday will try to make it to the semis of the CEV Volleyball Challenge Cup by hosting Aurubis HAMBURG. You can read all relevant news from volleyball world on Worldofvolley.com. 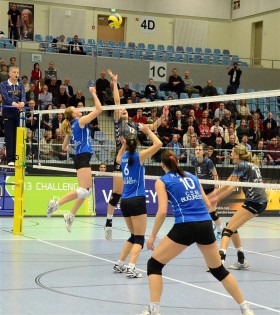 Middle blocker Roxana Ivanof and wing spiker Elena Lapusneanu paced their side with C.S.M. BUCURESTI that secured a 2:0 lead after only 35 minutes of play before cruising to a 3:1 win.

“That is our game and there we showed our real level. With this result we got the right boost of confidence and feel even more determined for the return match with Aurubis” head coach Ioan Dobre says. “We played well on Saturday and though we know that Aurubis is even stronger, I think we can do the same” adds Lapusneanu.

The club from Romania’s capital city was established only in 2009 and – similarly to Aurubis – is a real rookie in the European Cups. C.SM. BUCURESTI started out by scoring two wins over Belgium’s VC OUDEGEM (3:1 at home, 3:0 away), before claiming a double 3:0 in the next round while playing SLIEDRECHT Sport of the Netherlands and doing the same with Norway’s Stod Volley STEINKJER in the 1/8 finals.

That march was stopped in Hamburg last week but team captain Iuliia Popova says: “I do not know what happened there but this was just an accident. We want to make it to the semis and you can bet on our determination”. As Romania’s teams competing in the UEFA Europa League – Steaua and CFR Cluj – are playing away from home, Volleyball could make an impact in town and the organizer expects 1,000-1,500 people could be in attendance on Wednesday at Sala Polivalenta.