Two days ago via a special press conference held in Almere (see photo by Ronald Hoogendoorn) the Dutch Volleyball Federation announced that Gido Vermeulen was appointed to head the women’s national team thereby replacing Avital Selinger who had mentored the group for seven years and had left right before the Olympic pre-qualification tournament staged this past November in Croatia. 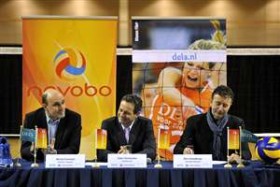 “It is a true honor for me to serve as head coach of the Dutch national team” says the 47-year old Vermeulen, who was at the helm of Spain’s national team up to late 2011. “We have a strong group that was well trained in the past years. I will do my best to talk to all the people involved before making my choices and work out a program. Our first test will be the Olympic qualifier coming up next May in Ankara but of course our plans are devoted also to the future. I want to share my knowledge with young, talented Dutch coaches and try to work closely with some other top colleagues from abroad. I am also ready to help improve the general level of the domestic competitions” he stresses.
Team captain Manon Flier who is currently playing in Japan’s V-League is happy with the appointment of Vermeulen: “I have heard many good stories about Guido. He has been working very professionally with the Spanish national team in the past few years and has a lot of knowledge about our opponents in the Olympic qualifier, so hopefully we will be able to take advantage of this there in Turkey. Our success story with Gido will be, I hope, something lasting also for the long term” she states.