By scoring a very quick 3:0 (25-19, 25-19, 25-16) to edge Germany’s Generali UNTERHACHING for the second time in seven days, Lokomotiv NOVOSIBIRSK qualified this afternoon for the Playoffs 6 of the 2012 CEV Volleyball Champions League – Men. 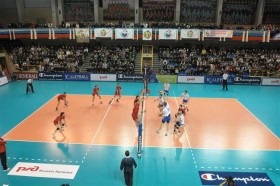 The game started with the score staying very tight up to the moment Lokomotiv broke away, with a mini break being claimed right by the second technical time-out before the Siberians could finish it off at 25-19. A similar scenario unfolded in set 2 with Lokomotiv NOVOSIBIRSK going up 16:14 at the second mandatory stop with a couple of blocks sealed by Andrey Ashchev and Michael Sanchez to close the way to Robert Hupka. With three aces in a row scored by outside hitter Denis Biryukov, Lokomotiv quickly wrapped it up for another 25-19. In set 3 Lokomotiv stormed out to a mighty 6:1 and Generali could do nothing to stop the Russian express that eventually booked its ticket to the Playoffs 6.
“We made some mistakes in the opening of the match as we were not fully focused” says home coach Andrey Voronkov. “After my players displayed the right concentration, we changed gear and we were able to take this important win”.

CEV VC: MONZA remains focused even after away win in Romania