CEV CL W: Dinamo only one step away from final four

Kazan, Russia, February 21, 2012. Russia’s rookie Dinamo KAZAN is only one step away from making it to the final four of the 2012 CEV Volleyball Champions League. The very last “hurdle” is represented by Azerrail BAKU, the winner of last year’s Challenge Cup, that is set to play the Tatars on Wednesday for the first round of the 1/4 finals. 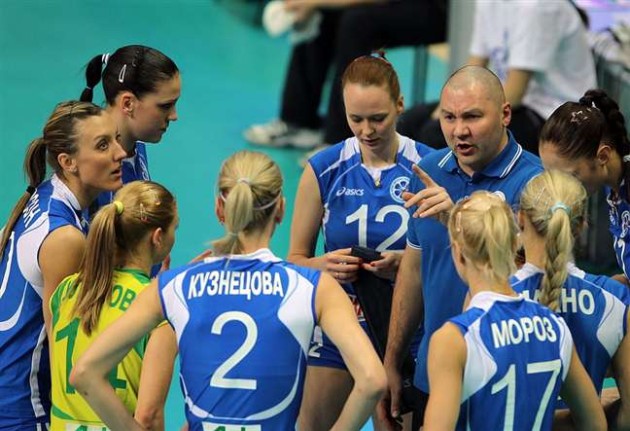 Dinamo only one step away from final four

“Their roster includes great players like for instance Polina Rahimova, Aksana Kavalchuk and Heather Bown we all know very well. Azerrail evidently wants to advance to the final four as this year it will take place in the capital city of Azerbaijan but this is also our main goal for this season” he adds.

Kavalchuk spent a total of four years in Kazan and even captained the team back in the 2009/2010 season. Azerrail may be sidelined by the knee injury that recently affected setter and team captain Oksana Parkhomenko who will be out for the remainder of the season. Brazilian spiker Elisangelo Paulino is currently captaining the Azeri side while Thai Nootsara Tomkom – who is only 169 cm tall – is normally lined-up as the starting setter.

Azerrail is currently ranked second in the national league, only one point behind the 2011 club world champions of Rabita BAKU. Dinamo tops the charts in the Russian league even though the Tatars lost the game with Samorodok KHABAROVSK played this past weekend.

That result, a 1:3 loss, is quite understandable as Dinamo traveled to the Russian Far East without their head coach and 7 starting players to save energy for the upcoming clashes with Azerrail. Wednesday will be some kind of a Volleyball day in Kazan as the match of the ladies will be followed by the clash of the home heroes of Zenit against VfB FRIEDRICHSHAFEN of Germany in the Playoffs 6 of the men’s competition.

ITA A1: Rauwerdink:”Held surprised me!”

SUI: Volleyball, U23, results, rankings: Results of U23 final tournaments