Castellanza, Italy, February 21, 2012. The long-lasting rivalry between Italy’s MC-Carnaghi VILLA CORTESE and Volley BERGAMO will be extended this coming Thursday after these sides already battled this past week for the Supercup that was eventually claimed by the group around superstar Francesca Piccinini. 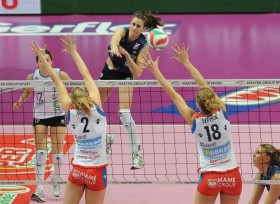 VILLA CORTESE and BERGAMO extend their rivalry to European arena

Actually BERGAMO and VILLA CORTESE have crossed their ways also in the finals of last year’s national league but this time there will be something special at stake, i.e. a pass for the final four of the CEV Volleyball Champions League scheduled for late March in Baku, Azerbaijan.

“We recently played Volley BERGAMO in the national league as well as last week for the Supercup. This defeat is difficult to explain because we were comfortably controlling the match but they showed some great fighting spirit and with the contribution of their stars, Piccinini and Arrighetti, they could turn the tables around. They left us in tears but we have the opportunity to go for immediate redemption. We shall give our best to bring this match home” says the coach of MC-Carnaghi VILLA CORTESE, Marcello Abbondanza.

The home side is a little worried about Canadian opposite Sarah Pavan who got slightly injured in the last round of the national league.

“She is a key player for us and our medical staff is fully dedicated to her recovery at the moment” adds Abbondanza.

AUT: Victories of favorites in quarterfinals

Ranking of the best volleyball players in...