Neuquen, Argentina, March 2, 2012 - Last Friday in this Patagonian city took place the first meeting of all Patagonian Volleyball Federations with the special presence of the Argentine Volleyball Federation President, Juan Antonio Gutiérrez, that headed the same sharing with local authorities and the Media a date with a clear message of development of federal volleyball. 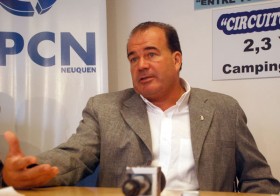 At the meeting subjects like competitions, refereeing and the reality of each present Federation were discussed with some of them going on on the next FeVA Council meeting, March 16th – 17th in Buenos Aires HQ.

As mentioned by the local Media, Gutiérrez pointed out that Argentine volleyball development is growing inside the whole Argentine provinces, urging the Patagonian Region “to develop themselves so as to insert themselves in a new structure, with the goal of improving their competitions“.

He also announced the start of the management to creat a volleyball development centre in that Region.

At the same time, the official launching of the 8th stop of the Argentine Beach Volleyball Tour took place.

The same will take place this next weekend in a year with great beach volleyball competitions all over the country.

There was already a province stop at the same UPCN Camping showing great organization.

The President of the Neuquén Volleyball Federation and FeVA Under-Treasurer, José María Cuadrillero expressed that Neuquén is proud to host a National stop and that the fact that UPCN joins such experience.