Yury Filippov the head coach of the "Locomotyv" (Kharkiv)speaks about the match. 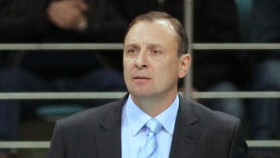 – Congratulations to the team “Dinamo” (Moscow) on victory. Today, Dinamo has shown the game to which you want to strive for. This is a kind of volleyball that should be played. What is the plan for the match in Kiev?

– First of all, we will try to show character. We should show  that our goal was not only to get into the playoffs, but to play decent volleyball.

Today, from Ukraine came many fans, the team felt the support?

– Of course, the team felt the support and it is always a pleasure to play in such atmosphere. The fans are very helpful to the team, I thank them very much. It is a pity that today we could not show the volleyball that we can play. We will try and prepare for the next game.

Yury Cherednik, the head coach of the VC “Dinamo” (Moscow):

– The first game of the playoffs was tense, because they started the game as if their lives depended on it, if I may say so. The team from Kharkov is good and serious.

The third set was played persistently, point by point, and in the end we managed to win. We were better in some elements than they were. But again, the game was not easy.

– What to expect in the next game?

– This is another Kharkiv, who can play at home. All of  games that we played with them this season show that at homes, they are very different, they have a different character, the other fighting style. In Kharkov it will be much harder than it is today.

RUS M: Tolochko instead of Konstantinov