As a volleyball player, it’s always a bit discouraging to walk into a local Foot Locker to find 10 columns of basketball shoes and asking around only to find that they don’t carry any volleyball shoes. But needless to say, every athlete loves a pair of nice shoes and volleyballers are no exception. 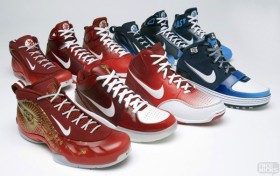 Traditionally, there are 2 major brands when it comes to volleyball. ASICS and Mizuno. At both the high school and the college level, both brands are very popular.

Everyone I’ve played with seemed to like both brands. Generally, Mizuno seems to be the preferred vendor especially with national teams, including Team USA, that are sponsored by Mizuno.

From a designing perspective, Mizunos seem more narrow than ASICS and more durable due to its leather construction.

On the other hand, ASICS are a bit wider to provide better breathability of the shoe for better comfort during performance.

But lately there seems to have been a major competitor to the classic Mizunos and the ASICS in volleyball footwear – the Kobe’s. i first noticed the shoe’s usage in volleyball while watching the 2008 Beijing Olympics.

Among the bland Mizunos, I saw what seemed to be a Nike logo floating around the court on Priddy’s shoes. At the time, I couldn’t truly digest the possibility of professional volleyball players showing up to court in basketball shoes, especially to a Gold Medal match against Brazil. I waived the thought for a couple weeks and went to the FIVB website for photos of the match. And to my surprise I found my fears were confirmed.

Yes, the players WERE playing with basketball shoes, and Kobe V’s at that.

This was a revelation to me as I hated the fact that so much research and innovation is done for basketball players’ shoes while most of volleyballers are stuck with no offense, ugly Mizunos and ASICS. So intrigued by this observation, I decided to consult professional help to set the record straight: I asked the members of the USA Men’s National Team. The verdict? Here are some verbatim quotes via Facebook messages from the bros.

Lloy Ball: “I wear Kobe 5′s. They’re basketball shoes but I think they are great for volleyball.”

Reid Priddy: “Hi there! I wear the Nike Kobe shoe. I highly recommend them! Enjoy.” 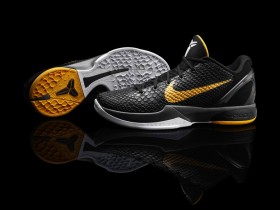 And get some I did. First, I was blown away by the fact that the guys even responded to my Facebook messages. And if Evan Patak tells me personally to go get some, you bet I’ll go get whatever I can get out there.

I found out for myself the hype of Kobe V’s. They ARE narrower than most shoes out there, but after breaking them in, they are very comfortable and seem to become a part of your feet. They’re one of the lightest shoes out there and is pretty durable as well. Not to mention it beats the crap out of the Mizunos and the ASICS on the swag factor.

But let’s not get too excited. The Kobe’s definitely feel lighter and perhaps add 0.01 inch to your vertical. Regardless, in no considerable way is the shoe going to change your fundamentals in volleyball. In my few months of using my new favorite shoes, I might have seen some improvements in various aspects of my game. Unfortunately, it’s not due to the shoes but more so because of my workout routine and practice.

So yes, you can wear basketball shoes in the gym next time you play a 6-on-6 and I do recommend the Kobe V’s for its comfort due to lightweight. If anything, wear it for the swag. But the Kobe’s are not foot-steroids that will add major vertical to your game. As with everything else, hard work and concentration sets you apart from the crowd. The verdict? Yes, shoes ARE overrated. Just ask Karch Kiraly.

ITA A1: All points for San Giustino against Modena

The black shoes are nike kobe 6.

PHOTO OF THE DAY: Ivan Zaytsev has...