ITA A1: All points for San Giustino against Modena 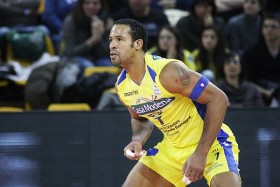 First three-point victory at home for san Giustino this season at the expense of Modena. The last victory overModena was in 2007. MVP Jereon Rauwerdink.

Jeroen Rauwerdink (Energy Resources San Giustino): “We are extremely happy, eventually a three-point victory at home. We have learned to take our opportunities after the 20th point. Fefé De Giorgi created the basis, and with Held the attitude changed both in training and in games. We are more of a team now. If someone is struggling there’s always somebody ready to help. We’re on the right track. We told ourselves this was a very important week for us, not only for our league position but for the spirit of the group”.

Giampaolo Medei (ass.coach Casa Modena): “We did not do well in tight situations at the end of sets. We lacked confidence. We manage to win when we create a big gap like it happened in the second set. We have to believe more in our ability”.

POINT OF THE YEAR: Bandero as Ronaldinho...