Mulhouse, France, December 5, 2011. ASPTT MULHOUSE has recently embarked on its fifth consecutive campaign in the CEV Volleyball Champions League having set the goal to make it out of the Pool phase. 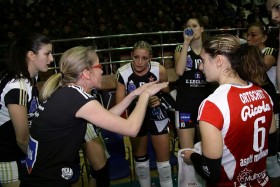 The club started the season pretty well by claiming a much desired win over the archrivals of RC CANNES this past October 22.

ASPTT MULHOUSE plays host to Fenerbahce Universal ISTANBUL this Tuesday after already playing other sides from Turkey’s metropolis in the past season, namely Eczacibasi and Vakifbank. Fenerbahce finished last year’s Champions League in third place and is a real pretender for the crown this time as well, so it will be a tough match for the local heroines.

MULHOUSE easily got past Vandoeuvre NANCY on Sunday for the last round of the national league and head coach Magali Magail is confident before the home debut in the European Cups even though she knows it will be a tough challenge. Her players are also looking forward to the match and want to cause a major surprise by beating Fenerbahce.

“We have never seen them playing but I know they have got many talented players” says captain Armelle Faesch. Many Turkish fans are expected to join the game on Tuesday for what promises to be a great Volleyball night.

Malagurski: I hope that I will be better and ready for the Olympic Games