Top Posts
2023 VNL Finals will be held in Poland...
POL M: ZAKSA again in pursuit of PlusLiga...
Russian federation denies joining Asian Confederation and announces...
CL W: No one has ever made such...
POL M: Jastrzębski remain without starting middle blocker...
CWCH M: Minas suffer from Paykan, led on...
GER M: BR Volleys continues winning streak and...
BRA W: Minas come back after 0-2 against...
CRO W: Lucija Mlinar holds first place in...
CL W: Women’s CL launched – Fenerbaçhe and...
CEV reveals name of one co-host of Men’s...
Home » Malagurski: I hope that I will be better and ready for the Olympic Games
Interviews

Malagurski: I hope that I will be better and ready for the Olympic Games

Sanja Malagurski get injured a month ago on the first match at the World Cup in Japan. She went back to Belgrade and now she is counting days to the surgery.

Until now I have never thought about this. Some times it hurts a lot. I worked every day strengthening exercises with conditioning coach Vladimir Bankovic and now I am quite sure that I am prepared for 8th December. On that day my doctor Milankov will do the surgical intervention to me in Novi Sad. He was operated my left knee two years ago, so I have full confidence in him. I hope that everything will end up well – said Sanja Malagurski. 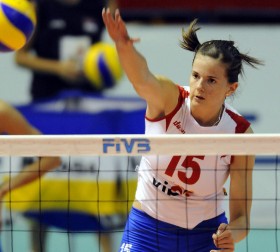 Many people thought immediately after the injury of the fact that the next Olympic Games will be next year. No one, not even Sanja, has no doubt if the Serbian team will be in London. With it or without her, it is still unknown.

– I know what I went through last time, with my left knee. Also, I know that the Olympic Games are in late July, which gives me the right to hope that I can be ready for games. However, I do not want to rush. High quality and safe recovery is crucial.

She used the opportunity and go to Italy, to talk with the Asystel management, a club whose member became this summer, but has not yet debuted.

– I am satisfied and happy because they are really professionals. They did not make any problems because of my injur. We found the best solution, so I extended the contract for another season, which means that I will play for Asystel player in next two years. It’s nice to know that someone is waiting for me.

They did not say a single word even when Sanja Malagurski said that she wants to get a surgery in Serbia.

– They believe me, as I believe the doctor Milankov. They understood that I trust him, because he already operated me. Simply, after all that bad luck, came a good period and put a smile on my face –  concluded Sanja Malagurski

Veljkovic for WoV: “With four titles from...