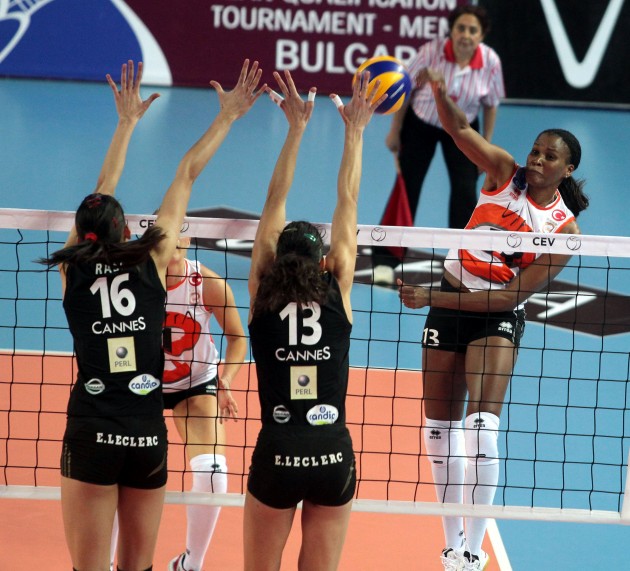 Neslihan Darnel top scored for the home side with 21 points while Nadia Centoni totaled 18 for RC CANNES.

The guests from France caught a good start and went up by the first mandatory stop (8:5); with the help of Mirka Francia and Maja Poljak, Eczacibasi bounced back to lead 12:10 and stretched the margin at the second technical time-out (16:13); RC CANNES committed some unforced errors but they still stormed back to draw level at 23 before Darnel and team captain Esra Gümüs scored the next couple of rallies to wrap it up at 25-23.

Darnel and Poljak were the leading scorers in this set with 7 and 6 points respectively. After Eczacibasi stormed out for the provisional 5:1, RC CANNES stepped up to set the pace at 11:9 in set 2; Anja Spasojevic and Milena Rasic anchored the French side (19:16) but some more errors helped Eczacibasi got back on track for the 19 all. A series of ties followed before Rasic scored twice to contribute the 24:22 for RC CANNES and Centoni finished it off at 25-23.

RC CANNES dominated the scene in set 3 (5:1, 8:2, 11:4, 16:6) but head coach Yan was forced into a time-out as the home side attempted a comeback driven by the serving of Busra Cansu. However, RC CANNES stayed focused and with Centoni being again on a high note sealed the set with the score of 25-18.

Set 4 unfolded in a similar manner, with RC CANNES going quickly up (6:2) before Eczacibasi rolled back for the 9 all. The great attacks of Milena Rasic widened the gap for RC CANNES (18:11) and the hosts had enough fuel to finish their duty in four sets.

“We did not play as we expected” says Eczacibasi head coach Lorenzo Micelli. “We made too many mistakes but I think we have our own chances to claim the return match in Cannes”.

The mentor of RC CANNES, Fang Yan, adds: “It was not a nice game as both teams made many errors. However, we stepped up from the second set onwards and we deserved this win”.

Serie A1 Sustenium round 8: change of schedule