After another hard-fought game, likewise the previous match played this past Wednesday in Rzeszow, Russia’s Dinamo MOSCOW could claim the 2012 CEV Volleyball Cup avoiding the risk of a golden set as the group coached by former Soviet star Yuri Cherednik edged Asseco Resovia RZESZOW with a 3:2 (28-30, 25-22, 26-24, 24-26, 15-9). 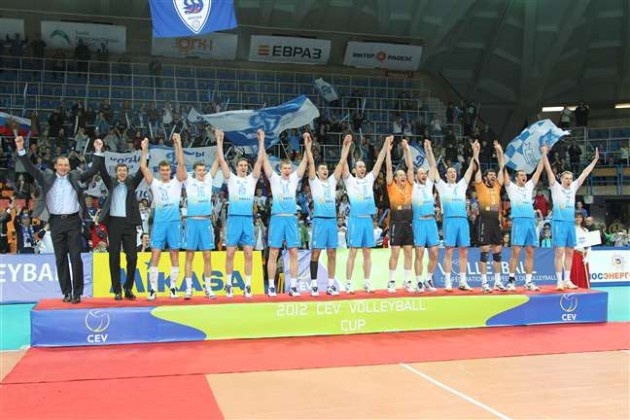 Dinamo was even close to wrap it up in four sets as the score stood at 24 all in the fourth section of the game but their opponents from Poland scored the next couple of rallies to seal it at 24-26 and call for the tie-break.

However, the celebrations for the home fans at “Druzhba” sports hall were only postponed as the Muscovites totally dominated the scene in the tie-break and quickly cruised away there up to the final 15-9.

Nikolay Pavlov paced Dinamo with a massive haul of 30 points and was voted by the journalists in attendance MVP of this year’s finals.

His contribution in offense was fundamental in order to finally edge Resovia and stop the great resistance opposed by the players around Belarusian star Aleh Akhrem.

With this win Dinamo re-asserts Russia’s dominance in this year’s European Cups after their compatriots of Zenit KAZAN had topped the charts of the 2012 CEV Volleyball Champions League by beating the hosts of PGE Skra BELCHATOW in the final match played a couple of weeks ago in Lodz.