British Volleyball program administrator Neil White has quit his role with the Federation in order to win a place at the Olympics. Libero White caught GB coach Harry Brokking’s eye playing domestically for Sheffield (see picture, White wears jersey n° 4) and has been added to the 16-man squad that was named on Friday. 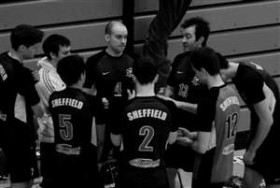 “Neil showed great passing ability when he played in a practice match against Tunisia in 2010” said Brokking.

“Tunisia has qualified for the 2012 Olympic Games by winning the African qualifier this past January in Yaoundé”.

White will join up with the squad when they come together in Sheffield later this month following the end of their domestic seasons overseas.

He will then join in the preparations for the Olympics, with British Volleyball expected to next week announce a series of friendly internationals that will form part of the team’s preparations for London 2012.