After losing last year to the compatriots of Azerrail, this time Lokomotiv BAKU did not miss the opportunity to celebrate its very first European triumph by claiming the 2012 CEV Volleyball Challenge Cup after another terrific game with Baki that prolonged the series to the golden set (15-13) after the return final had ended in a 2:3 defeat for Lokomotiv (27-25, 19-25, 25-21, 20-25, 13-15). 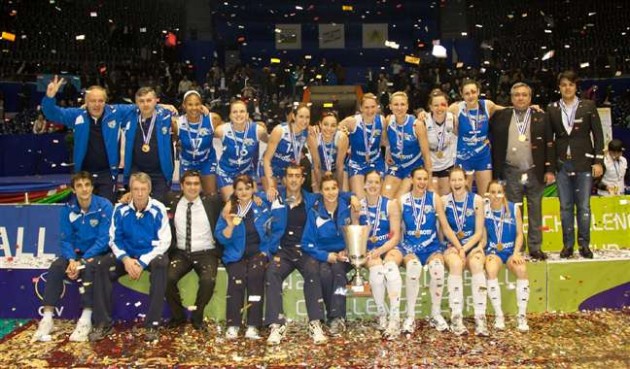 Finally three out of four finals of the CEV Volleyball Cup and the CEV Volleyball Challenge Cup were decided by the golden set but this afternoon the game had started pretty well for Lokomotiv that was coming out of a 3:2 win in the first final game played this past Wednesday.

Nancy Jean Metcalf scored quite many points for Lokomotiv and the opening set was pocketed at the end of a close final rush (27-25) that delighted some 5’000 fans in attendance at “Heydar Aliyev” Sports and Concert Complex in Azerbaijan’s capital city.

However, Baki BAKU fought back with great determination and eventually seized the game at the end of five, long sets. The group mentored by Brazilian Angelo Vercesi extended that great momentum also to the golden set going up there 12:10 but finally ran out of fuel as Lokomotiv clawed back with great blocks and splendid spikes to ultimately seize the trophy and see Nancy Metcalf be awarded as MVP of the finals.

KOR M: Hyundai and KGC Daejeon even in series