Castellanza, Italy, December 13, 2011. A stellar Volleyball game is coming up on Wednesday night at “Pala Borsani” in Castellanza as Italy’s MC-Carnaghi VILLA CORTESE plays Eczacibasi VitrA ISTANBUL for the third round of action in Pool A of the 2012 CEV Volleyball Champions League – Women. 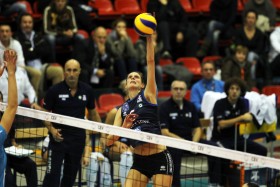 These teams share the same situation as they claimed 3 points apiece from their previous matches.
Some of the best Volleyball players out there are the real pre-condition for a splendid game: Lindsay Berg, Lucia Bosetti and Martina Guiggi will defend the honor of the home team while Eczacibasi will rely on Maja Poljak, Mirka Francia and Senna Usic Jogunica.

There will be an additional clash between the players who are currently ranked second and third in the charts of the best scorers after two rounds of action in the CEV Volleyball Champions League, namely Neslihan Darnel (52 points) and Sarah Pavan (48).

“Our goal is to take home as many points as possible” says local head coach Marcello Abbondanza.

“We want to qualify as soon as possible for the next round. Last week we scored our first win by edging SCHWERINER SC and we want to continue with that good pace. We know very well the value of Eczacibasi: some players like Poljak, Francia, Usic used to play in the Italian national league, others are part of Turkey’s national team. Our mission won’t be easy but we have been training hard for the past days improving the quality of our play. The toughest games of this season are just ahead of us but we feel ready” he concludes.