Great Britain scored on Saturday afternoon a 3:0 away win (27-25, 25-23, and 25-20) to edge Albania for the first of two matches that will determine the side finally advancing to the second qualification round of the 2013 CEV Volleyball European Championship scheduled for this coming September. The guys that will represent the hosting country at the 2012 London Olympics did not have it easy but finally cruised to that much wanted victory at “Asllan Rusi” sports hall in Albania’s capital city, while the home team was evidently sidelined – especially in the key moments – by the absence of three starting players. 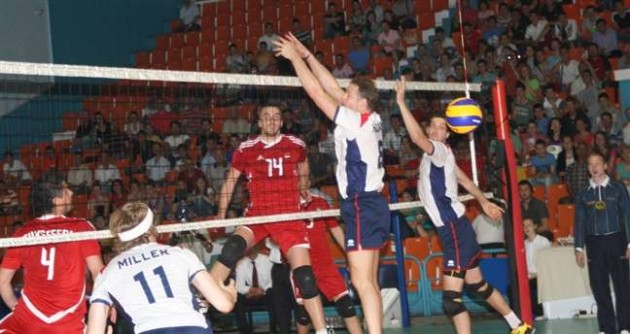 Actually Albania had started pretty well setting the pace of the game for most of the opening set and going up by 4 points at the second mandatory stop (16:12). However, Great Britain was able to storm back and draw level at 18 before Albania accelerated again but without being able to finalize its quest. Two set balls were missed by the home heroes as the young players included in the group evidently did not cope with the pressure there, and this paved the way with gold for the guests who eventually wrapped it up at 27-25.

The second set was very hard-fought up to the score of 13 all; afterwards Great Britain was able to impose its rhythm opening up the gap (22:19) and even though Albania fought back (23:22), still the guests could seal the deal by scoring the next couple of rallies (25-23). Very much relaxed and showing real confidence, the Brits dominated the scene in the third set to go for the final 25-20 and finish it off in straight sets, waiting for the return match scheduled for next week in Crawley.

VfB Friedrichshafen celebrated 3-0 in Tours in the CEV Champions League play-off match. The match between Ziraat an… https://t.co/7XXmHxIkBt

Reply Retweet Favorite
.@VeroVolley and @AMSVolley go to quarterfinals – German side doing it for first time as pool leader… https://t.co/XOnjYHgHYt