Schwerin, Germany, January 9, 2012. On Tuesday night SCHWERINER SC will play MC-Carnaghi VILLA CORTESE to get their first win in preliminary Pool A and to keep their dream alive of making it to the next stage of the 2012 CEV Volleyball Champions League. Although losing all four games so far the SSC is optimistic to be on the better end against Italian top team MC-Carnaghi VILLA CORTESE. 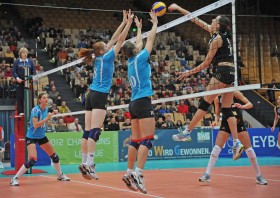 In the German Bundesliga the local heroines of SCHWERIN are showing their great potential and their winning mentality collecting big wins and being in the top three of the league.

Also by making it to the final act of the German Cup, SCHWERIN still shows that they are hungry for titles and big matches.

Therefore, the SSC ladies are willing to take their small chance of still making it to the next round of Champions League play by winning the last two games of Pool A.

SSC Dutch coach Teun Buijs still has hope that his team can make it to the next round due to the experience from the last “European games” as well as from their upswing in the Bundesliga and the German Cup: “We can still make it. My players are highly motivated and we showed in previous games that we can match the other teams in our group. Now we just have to show it throughout an entire game. We only need to get our first win then everything is possible”.

VILLA CORTESE, currently second in Italy’s Serie A, needs a win as well in order to secure their third place in Pool A which guarantees the qualification for the next round  in the 2012 CEV Volleyball Champions League.

Therefore the crowd in the “Sport –und Kongresshalle” expects to see an exciting game of top level Volleyball.