Luxembourg: DOL for Olympic qualifiers coming up in the next days

Luxembourg, January 11, 2012. With the last stage of the European qualification process to the 2012 Summer Olympics in London slated for next May, the Drawing of Lots for the tournaments taking place in Ankara (women) and Sofia (men) is scheduled for this coming Sunday, January 15, in Turkey’s capital city and on January 20 in Bulgaria. 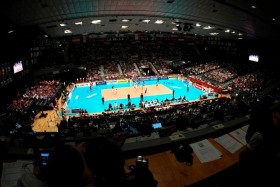 DOL for Olympic qualifiers coming up in the next days

The winners of these tournaments will book their trip to London and hence fulfill their Olympic dream.

A total of 8 teams per gender are set to join these tournaments and they will be assigned by the DOL to two preliminary groups of 4 teams each.

The first and second ranked of the preliminary Pools will play crossed semifinals with the event being rounded out by the final match where a valuable ticket to the Olympics will be at stake.

The DOL will be carried out in such a way that the two highest-ranked teams from the last edition of the CEV Volleyball European Championship (Serbia and Italy for the men’s competition, Serbia and Germany in the women’s division) won’t be assigned to the same preliminary group.

Additionally, teams stemming from the same pre-qualification tournament won’t cross their ways in the prelims and will be assigned to different Pools.

The starting field of the two continental tournaments includes: Men: Bulgaria (organizer), Serbia and Italy (first and second ranked from the last European Championship not qualified via the World Cup), Spain, Germany and Finland (winners of the three pre-qualification tournaments staged this past November) plus Slovakia and Slovenia (the “lucky-losers” from the pre-qualifiers).

Women: Turkey (organizer), Serbia and Germany (first and second ranked from the last European Championship not qualified via the World Cup), Poland (fifth ranked from the last edition of the European Championship), Russia, Croatia and Bulgaria (winners of the three pre-qualification tournaments staged this past November) and the Netherlands (that benefited of the repechage for the second best-ranked team across all pre-qualification tournaments).