The XXXIII CEV General Assembly is scheduled for this weekend in Grand Duchy of Luxembourg, CEV Congress will address the 2014 and 2015 European Championships, with the BOA members having casted their votes. BOA members discussed the positive outcome of the 2012 CEV Junior Volleyball European Championship held this past summer in Turkey (women) and Poland/Denmark (men). 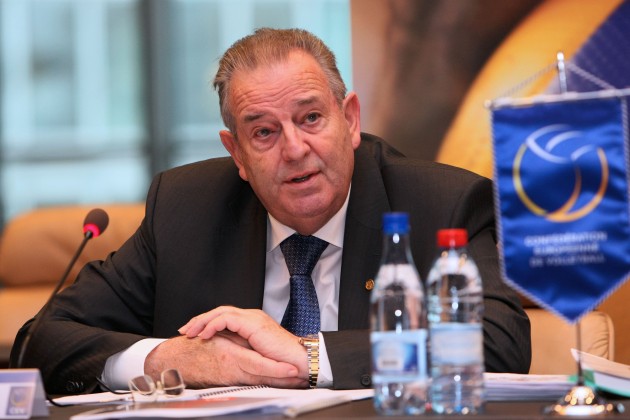 The past few months have been extremely important for the future of Volleyball especially as the FIVB held its first democratic elections thereby also penciling the guidelines whereby the sport is likely to be governed in the next four years. Europe is ready to assume its responsibility to contribute to this process and it is hence important to note that after the FIVB World Congress held this past September in Anaheim the highest CEV authorities were attributed a series of important functions to help steer the future of Volleyball also on the international scale.

CEV President André Meyer has been appointed 2nd Vice President, President of the Financial Commission and will also serve as Executive Vice-President responsible for Administration, the Refereeing as well as for the Rules of the Game Commissions.

Two more CEV Vice Presidents, Miroslaw Przedpelski and Renato Arena, were also attributed key positions by the world’s Volleyball governing body, with Przedpelski being a co-opted Executive Member and acting as Marketing Coordinator, while Mr. Arena will be chairing the World League Council for the next four years.

Moreover, the President of the Russian Volleyball Federation, Mr. Stanislav Shevchenko, has been appointed as Executive Board member in charge of the Coaching Commission.

Back to today’s agenda, the Board agreed that the CEV will be working closely with the FIVB in order to protect the interest of the relevant parties in case of violation of the rules to be applied for obtaining International Transfer Certificates (ITC) or non fulfillment of the clauses specified in the players’ contracts.

The BOA members discussed the positive outcome of the 2012 CEV Junior Volleyball European Championship held this past summer in Turkey (women) and Poland/Denmark (men) before their attention was drawn to the upcoming major events, and specifically the various European Champs coming up in the next years, with the next important stops being the final rounds of the senior competition taking place next year in Denmark/Poland (men) and Germany/Switzerland (women).

The CEV is also working intensively to prepare the events qualifying for the next edition of the FIVB World Championships – in all age groups – with the qualifiers for the senior Worlds being placed, for the very first time in history, under the authority of the various Confederations.

The CEV is also ready to start with the implementation of an ambitious development project funded by the FIVB that shall help involve as many youngsters as possible into Beach Volleyball and is also combined with the debut of this discipline at the 2014 Youth Olympics in Nanjing, China. This large scale project will involve all parties who can contribute to the organization of successful Beach Volleyball events and also help improve the skills and education of those that will be hosting events placed under the CEV umbrella.

The Presidents of the various Commissions reported about their respective activities from the past months and the Board also decided to establish an ad-hoc working group in order to discuss all pending issues about the international calendar and possibly harmonize the schedule for the next months and years by taking into account the needs of all parties involved.