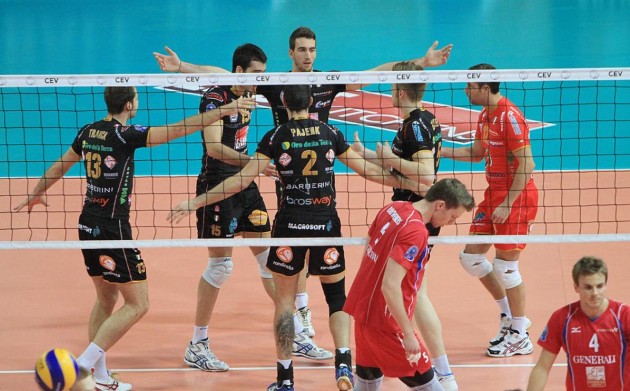 In the men’s division, 7 teams are topping the charts of their respective group with an immaculate record of 4 wins and no losses. These are last year’s winners of Zenit KAZAN, another Russian standout, Lokomotiv NOVOSIBIRSK, Italy’s TRENTINO Diatec, Lube Banca Marche MACERATA and Bre Banca Lannutti CUNEO, plus PGE Skra BELCHATOW of Poland and Noliko MAASEIK of Belgium. Even though they all have showed great quality and consistency, MACERATA remains the sole side – together with Zenit KAZAN – that has conceded no sets at all to its opponents, a feat that is even more remarkable as the group is missing Cristian Savani and Jiri Kovar due to injury.

In what was unanimously seen as the “iron group” before the start of the season, i.e. Pool E, last year’s silver medalists PGE Skra BELCHATOW have edged twice their closest rival, Dinamo MOSCOW, and can confidently look at their last two preliminary matches with Romania’s rookie Tomis CONSTANTA and Turkey’s Fenerbahce Grundig ISTANBUL.

With the extension of the starting field to 28 teams, this year only 5 out of the 7 second-ranked teams at the end of the prelims will advance to the Playoffs 12 and therefore the next couple of rounds that are coming up in early December are supposed to provide all Volleyball fans with a series of stellar clashes as every single set and point may count in the end.

In the women’s competition two teams from Turkey – Eczacibasi VitrA and Vakifbank ISTANBUL – plus two more from Azerbaijan – the silver medalists at the 2012 FIVB Club World Championship, Rabita BAKU, plus the rookies of Lokomotiv – have scored four consecutive wins in their prelim groups. Here all first and second-ranked teams at the end of the League Round will make it to the Playoffs 12 but the run is not less thrilling than in the men’s competition. Just as an example to see how close this competition is, last year’s silver medalists of RC CANNES are currently ranked third in Pool A after suffering home defeats to Vakifbank and Uralochka-NTMK EKATERINBURG and will need to take maximum points from the next rounds of play to make it to the next stage.

The League Round is set to resume next week and will be completed on December 11 and 12 for women and men respectively. The Drawing of Lots for the Playoffs and the Challenge Round of the 2013 CEV Volleyball Cup is scheduled for December 13 and will also include the announcement of the clubs that will be hosting the final four tournaments coming up in March 2013.

GER W: Jennifer Geerties back in the field