Right in the last stretch of the prelims of the 2013 CEV Volleyball Champions League, BERLIN Recycling Volleys are hosting Lokomotiv NOVOSIBIRSK this Tuesday. This and other volleyball news read on Worldofvolley.com. 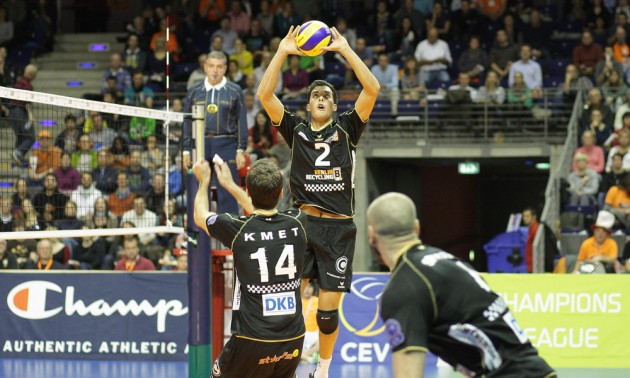 For the 2012 German national champion, the up-coming home clash is one of the season’s highlights as the Russian standout is one of the best European teams. The pressure, however, is still on the side of the team of BERLIN head coach Mark Lebedew. Having scored four wins out of four matches, the Russian cup winner has lived up to its favorite position in Pool B and is very likely to top the standings after the completion of the prelims. BERLIN on the other side is still fighting for the second position and its qualification to the Playoffs as one of the best five second-ranked teams.

“NOVOSIBIRSK always has been the clear-cut favorite in our group and everyone expected them to top the standings after the prelims”, BERLIN team captain Scott Touzinsky says. Despite its outsider role, his team approaches its last home match of the prelims confidently as BERLIN showed much resilience when playing NOVOSIBIRSK in Siberia earlier this season (1:3). “Lokomotiv has a well-cast team. The players are not solely individually strong but they also play well together. If only physical superiority counted, we would hardly be able to keep up with them. But for the first game in Novosibirsk, we managed to show our play and to act as a team. And that must be our strategy on Tuesday”, the Australian mentor says.

Both teams scored easy wins in their respective national league, with BERLIN outdoing his local rival Netzhoppers KW-BESTENSEE 3:0 (25-20, 25-15, and 25-20) whilst defending its first rank in the Bundesliga and NOVOSIBIRSK having the edge over Shakhtar SOLIGORSK 3:0 (25-19, 25-13, and 25-21) also topping the national standings.

For Tuesday Mark Lebedew is counting on the local spectators. “Past games showed that we’re capable of maximum performances when our crowd is supporting us. I hope our team can make use of this special atmosphere against NOVOSIBIRSK.”