A muscle that is stretched before a concentric contraction, will contract more forcefully and more rapidly (4,5). 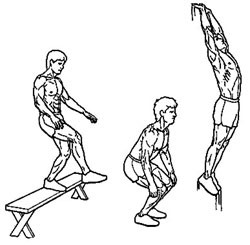 A classic example is a dip just prior to a vertical jump. By lowering the center of gravity quickly, the muscles involved in the jump are momentarily stretched producing a more powerful movement. But why does this occur?  Two models have been proposed to explain this phenomenon. The first is the

In this model, elastic energy is created in the muscles and tendons and stored as a result of a rapid stretch (6, 7, 8). This stored energy is then released when the stretch is followed immediately by a concentric muscle action. According to Hill (9) the effect is like that of stretching a spring, which wants to return to its natural length. The spring is this case a component of the muscles and tendons called the series elastic component. The second model is the

When a quick stretch is detected in the muscles, an involuntary, protective response occurs to prevent overstretching and injury. This response is known as the stretch reflex. The stretch reflex increases the activity in the muscles undergoing the stretch or eccentric muscle action, allowing it to act much more forcefully. The result is a powerful braking effect and the potential for a powerful concentric muscle action (10, 11, 12).

If the concentric muscle action does not occur immediately after the pre-stretch, the potential energy produced by the stretch reflex response is lost. (i.e. if there is a delay between dipping down and then jumping up, the effect of the counter-dip is lost).

It is thought that both the mechanical model (series elastic component) and the neurophysical model (stretch reflex) increase the rate of force production during plyometrics exercises (6, 7, 8, 10, 11, 12).