Roberto Baggio – One look at La Bombonera changed everything

Roberto Baggio was given an international send-off match on 28 April 2004 against Spain, he ended his professional career, but that was not his farewell to football. 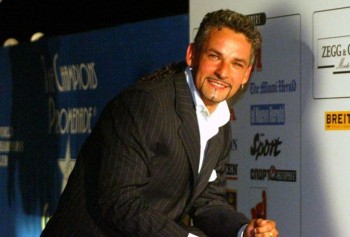 In 2001, Baggio wrote an autobiography titled Una porta nel cielo (“A Goal in the Sky”, but also “A Door in the Sky”), including details about his career, the missed penalty in the 1994 World Cup Final, his injuries, personal life and rifts with managers. It won the award for best football book at the 2002 Serie A Awards.

On 16 October 2002, Roberto Baggio was nominated Goodwill Ambassador of the Food and Agriculture Organization of the United Nations (FAO).

In 2003, Baggio was the inaugural winner of the “Golden Foot” award.

On his 40th birthday (18 February 2007), Baggio started his new website (www.robertobaggio.com) to converse with his fans. As per his website he does not intend to return to mainstream football, but rather exchange words with his fans on his blogs.

In March 2008 Baggio—who has owned a ranch property in Argentina for many years—gave a lengthy interview with Gazzetta Dello Sport. In it he discussed many topics, including the team he now supports: Boca Juniors. “How did I become a fan of Boca? It’s an interesting story. A rainy Sunday, I was at my house with a friend of mine and I saw a game on TV. The score was 4–0, and was played at the Boca stadium, La Bombonera. At one point they scanned across the crowd at their fans: they danced, they sang, they twirled flags and banners. A contagious joy. I said to my friend, ‘It’s beautiful to do this when their team is winning.’ And he turned to me and said: ‘Roberto, are you watching? Boca are losing 0–4! …’ From that moment Boca has become my team. That stadium gives me incredible feelings.”

August 2010 marked Roberto Baggio’s comeback into Italian football, as he was appointed as president of the technical sector of the Italian Football Federation (FIGC), replacing Azeglio Vicini.

He obtained Italy Category 2 Coaching License (UEFA A License) in mid-2011, made him eligible to coach Lega Pro teams or as vice-coach in Serie A and Serie B. Furthermore, since August 2010 he is the technical director of the FIGC, the Italian Football Federation.

In 2011, Baggio was inducted into the Serie A Hall of Fame, along with other notable footballers and coaches, such as Michel Platini and Marcello Lippi.

On July 5, 2012, Baggio obtained his Category 1 UEFA Pro Coaching Licence at Coverciano, which will allow him to legally coach a professional Serie A football club. He was subsequently approached by his former agent and Serie B side Modena with regards to a coaching position, after being awarded with this qualification.

On January 23, 2013 he stepped down from his position as the Director of the Technical Sector of the Italian Football Federation. He has stated that the Federation had not listened to his ideas about improving the system and focusing on youth talent, which moved him to quit.

Are Italians the best at coaching?