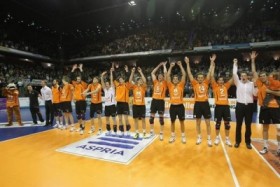 Scott Touzinsky and Felix Fischer should extend their contracts with the club. Paul Carroll, Tomas Kmet and Kawika Shoji have signed the contract until 2013, while the setter Jaroslav Skach will leave BR Volleys. It is still uncertain whether the Finn Urpo Sivula will stay in the club. The setter Kawika Shoji (USA) has signed the contract for another three years and the American Scott Toucinsky will possibly remain in Berlin for the same period of time.

Furthermore, in the team have stayed the Australian Paul Carroll, the Serbian opposite Aleksandar Spirovski, the Polish libero Martin Krystof, the Croat Roko Sikiric, the Slovakian Tomas Kmet and the German players, Felix Fischer, Ricardo Galandi and Björn Höhne.