INTERVIEW: Morrison for WoV – “I took a breath and collected myself after being let go”

One of the world’s most promising volleyball coaches, Jamie Morrison, is about to return to work with professional players after a one-year break. 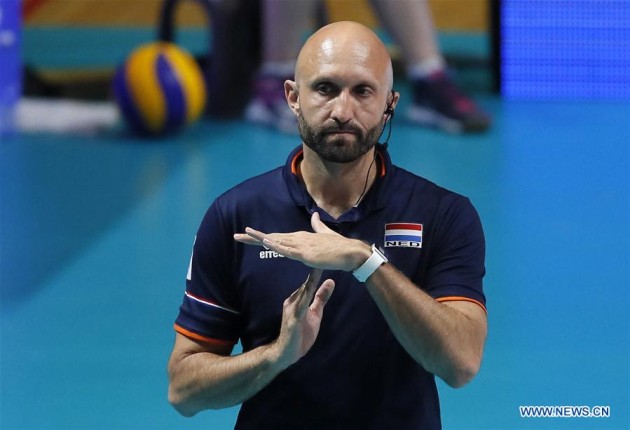 After parting ways with the Dutch Women’s National Team in 2019, Morrison took time to reflect on his career, as he explained in an interview for our website which you can read in the next few paragraphs. Now, as a kind of a warm-up for the main scene, an American expert accepted to help the Texas Longhorns women’s team.

And the main scene we are talking about is the new US Women’s Pro League called Athletes Unlimited, in which Morrison got the opportunity to be one of the coaches and pave the path to what many volleyball fans in the United States hope for – the professional league that will last for years and get stronger by each year.

How did the collaboration with Texas emerge?

“It all started with a text message from Erik Sullivan, a current assistant coach at Texas and former libero for the USA Men’s National Team. Erik and Jerritt Elliott, the head coach at Texas, knew I was available and asked if I’d want to come to help out. I didn’t have a lot of time because of the commitment with the Pro League, but they valued the limited time I could spend there. So, I spent 3 weeks in Austin before arriving in Dallas and I’ll finish the season with them once I’m finished here.”

It seems that becoming a volunteer assistant coach is a fairly common occurrence in NCAA volleyball. What exactly does that mean?

“Volunteering is actually how I got my start in volleyball many years back at UC Santa Barbara where I received my degree. The NCAA is the governing body for college sports and limits the number of paid coaches that a team can have actively coaching on the court. It is often filled by someone early in their coaching career or occasionally by someone that just misses coaching like myself, Joe Trinsey, Carl McGown at BYU, and Marv Dunphy at Pepperdine.“

What do people in the Texas University volleyball program expect from you in the coming period, i.e. while you are a part of it?

“I have spent the last 3 weeks, some of it in person and some of it virtual because of COVID restrictions working with their setters and offensive systems. Jerritt and the staff have been great and given me the freedom to go to work in our gym. The girls have been amazing and I think we have made some good changes in the 3 weeks that I’ve been there. I’m looking forward to seeing what we accomplish once we start playing in matches. I am now transitioning to Athletes Unlimited so I’ll be teaching from afar. I have been playing with alternative teaching methods like flipping the classroom for some time so I’ll be looking to have as big of an impact as I can from across the state of Texas.”

An interesting project of the US Women’s Pro League will begin soon. What will be your role in it?

“The new Pro League is called Athletes Unlimited. I am serving as one of the four coaches for the league. The league is a unique format in that it is athlete-driven, there is a draft, and an individual points format that will make it stand out from other leagues. My job is to help the captains and teams I’m working with to win as many points as possible. It is different but should be fun, so tune in and watch. (If you are interested, follow along at www.auprosports.com)”

Are you satisfied with the quality and names of the players who signed contracts for the competition? And, there are some really big names…

“Absolutely! I ran into Jordan Larson quickly during check-in and remembered how much I enjoyed coaching her and the rest of the girls that are here from the US National Team. I also had a moment last week that brought a smile to my face as I realized I get to coach Shiella Castro again after coaching her with VakıfBank a few years back. There is a great mix of experience and youth within this league and I guarantee some of the younger players here will impress over the 5 weeks.”

For many years, there was talk of forming professional volleyball leagues in the US. The men’s league exists, now the women’s is also created. However, it seems that these projects either do not come to life in the best way or disappear quickly. Why is it so?

“I believe it is a combination of the US perception of what professional sports should be and the size of our country. Our American football teams play in arenas that seat up to 100,000 people. Our basketball teams fill 18,000 seat arenas. All of our professional sports charter flights from one place to another. Some of our college volleyball conferences do similar things. A lot of our college athletes are surprised when they travel to professional leagues in other countries and there is no locker room with a television or that they have to take 8-hour bus rides to matches. Past leagues have failed because of a need to live up to those expectations. Secondly, I don’t think that a lot of people in Europe appreciate just how big the United States is. There are a lot of clubs that can’t play in the Champions League or CEV Cup because they can’t afford the travel. In order to have a nation-wide professional league, teams might have to travel the equivalent of Amsterdam to Istanbul two times per week.  The Athletes Unlimited format solves that by bringing all the athletes to one place and playing in somewhat of a pod or bubble similar to what the V.League is doing in Japan. Fans can follow along through TV broadcasts, social media, and hopefully in person one day soon.”

You were at the helm of one of the strongest women’s national teams in the world for a full two years, of the Dutch, with notable results. What experience do you take from there?

“I took a lot from my time there and I wouldn’t trade it for anything. I grew a lot as a person and a coach in those three years. First, I take confidence. I’m proud of what we accomplished, especially in those first two years. We finished with two VNL Final appearances, a European silver medal, and we were one swing away from going 5 with Serbia and a potential medal at World Championships. Even during that third year, I look at our European Championship matches and with the exception of our Turkey match, we were playing exceptionally good volleyball. That gives me confidence in knowing that the way we were teaching was the right way and that the culture we were trying to create was the right culture. To me, that third year came down to two matches – one against Italy in Italy and the other I mentioned against Turkey in Turkey. We fought in those matches, but I don’t think we were able to show what we were truly capable of. I’m a believer in learning from all of the experiences we have in life, so after being let go, I sat down and really took a look at what I could have done better over those 3 years. I have always valued the relationship between coach and player but realized I needed to honor that relationship with every player on my team. I clearly outlined what changes needed to be made and the behaviors I need to see from my teams in those big matches. It has become a big part of my coaching philosophy since then and I’m happy to have had the time to reflect. Through the good and bad of the 3 years, I became a better coach and wouldn’t trade my time in the Netherlands with the players and staff for anything in the world.”

You took a break from coaching for over a year. In the meantime, a pandemic occurred. What did you do during that period without being professionally engaged in volleyball?

“I took a breath and collected myself after being let go – that isn’t easy for any coach. I decided I wanted to learn from the experience so I took some time to cement who I wanted to be when I took my next coaching job. I also decided I wanted to add some tools so I became certified as a nutrition coach because I have always felt uncomfortable having those conversations with athletes because I was not an expert. As coaches, we rarely get time off, so I decided to take 6 weeks and tour New Zealand in a campervan and then planned to take a job in Europe. COVID had other plans (for me and everyone) – 6 weeks turned into 5 months because of a lockdown in New Zealand. It turned out to be the trip of a lifetime. COVID then threw the volleyball market into chaos with Germany shutting down their season in February and Turkey finally calling their season in May so taking a job became more difficult last season. The entire time, I have been consulting with various youth clubs and college programs around the US, I created an online school www.imparosports.com and I’ve been studying the game as much as I can. Volleyball is a piece of who I am and even when I am not directly involved, I tend to always be connected to the game in some way.”

You are practically at the very beginning of an independent professional coaching career. In theory, the plans should be big, but how is it in practice?

“I want to return to Europe for a few more years. I know at some point, I will end up back in the United States but right now, I want to coach at the highest level possible. That might mean competing for a Champions League title. It might mean trying to qualify for the Paris Olympic Games. I am up for either challenge. I have talked with a few clubs over the past month, but nothing is official yet so stay tuned. Either way, I’m looking forward to competing again.”