Getting to know: Matthew Denmark

Friedrichshafen, Germany, January 25, 2012. He is a real globetrotter and currently spending his second year with VfB FRIEDRICHSHAFEN. US American Matthew Denmark has also played in Portugal, Puerto Rico, Romania, Cyprus, Greece and Spain. Germany is the seventh nation, FRIEDRICHSHAFEN the tenth club of his professional career. 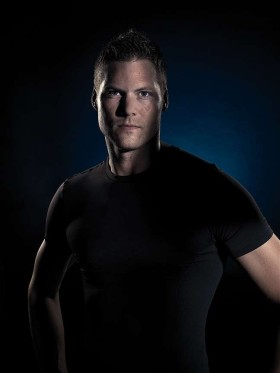 In this interview the 32-year old middle-blocker from the USA talks about his experience in Germany and the goals he shares with the German champion from the Lake of Constance.

After the victory over KAZAN it seems that your club FRIEDRICHSHAFEN has a great run. What is the reason for that?

During the past years VfB FRIEDRICHSHAFEN won all the matches right from the start of the season very clearly. There were almost no defeats in the Bundesliga. Now we lost already two matches in the first half of the season, another in the second half. So we noticed that we have to work very hard. That is what we did the last weeks. We improve from match to match and could celebrate the surprising victory against KAZAN.

After KAZAN as one of the strongest teams in the 2012 CEV Volleyball Champions League you played the last three-ranked teams of the Bundesliga, i.e. DÜREN, ROTTENBURG and BOTTROP. How do you prepare for such different tasks?

There are no big differences. If we come into our ZF Arena, we have always the goal to win the match. It does not matter, if we play against KAZAN or now against the next to the last in the Bundesliga. The situation is the same: we have respect for each opponent but of course it is something special to compete with a team like KAZAN. These guys I just see playing in TV at the Olympics. Therefore the intensity is higher than while playing against a German team.

For you it is the second year with VfB FRIEDRICHSHAFEN. Do you feel well there?

Volleyball is a part of my life and I love to be in the gym. But also friends and a nice surrounding, where I feel well, are important for me. At home in the USA I have my family, which I miss here in Germany sometimes. But here I found another, a second family. The contact to our fans after the match, the people who know me and talk to me when I am shopping or just going around in the city and of course the whole organization of the club – all these things I like very much in Friedrichshafen.

You are learning German. How is it going with this language?

It goes on. I have some software on my computer and study continuously. Right now I understand a lot and my speaking skills are not that bad. But I speak very slowly, because the grammar is quite difficult. I feel better in English. But I have moved to the second level and try to improve more and more.

Regarding the German championship: where do you see your team at the end of the season?

I think that we will play for the championship. To win it is still our main goal of the season. Okay, we already lost two times against Generali UNTERHACHING. But with the victories against BERLIN and also KAZAN we made it clear that we are not too bad. Nobody should underestimate us. We are ready for the next challenges.

Italy: All smiles with back to back wins