RUS: Mikhailov: The second match would be much harder

After the victory over the German "Friedrichshafen" in the first match, of ‘’Playoff six’’ in the Champions League we have an exclusive interview with opposite of "Zenit" (Kazan), Maxim Mikhailov. Zenit Kazan - Friedrichshafen 3-0 (25:17, 25:21, 25:18). 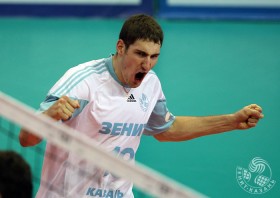 Maxim Mikhailov, spoke about the match, how his team played and future plans.

– Maxim, we congratulate you with a confident victory over the German “Friedrichshafen“. Tell us a little more about the match.

– Thanks for the congratulations! In fact, all the advantage was produced at the end of sets. Friedrichshafen is a serious contender, they showed a very good game, but made slightly more errors than we did. I believe that was the key which we used to win this game.

– They made a lot of errors, mostly on the serve, do you think that’s because they didn’t have both of their opposite? 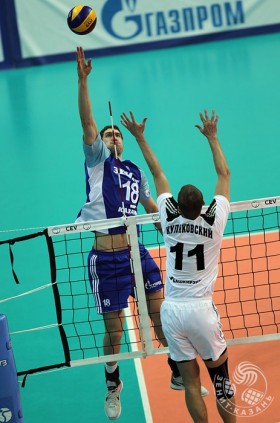 – Yes, of course. With them this team would play better. However, the middle-blocker who played as the opposite, played very well. I think that errors were primarily conected with the tactics  – they wanted take advantage on the serve and make harder to our reception. As you know, “Friedrichshafen” is the other team when they playing at home, at away matches they don’t showing good volleyball.

– You played with the “Friedrichshafen” at the start of the tournament. Did you recalled those meetings before this match?

– Sure. In those two games we have scouted an opponent. Looking how they play agains us, what weaknesses they have and which one our team can use. I think this game will bring good material to learn something new.

– Your team had a 10-day break since the last match?  Surely it was time to rest and train, right?

– Well, yes. The first few days we have been preparing hard, because we needed to improve our functional status. And before the game, we had a little time to rest. This is necessary so that the muscles came into good shape.

– How did you spend those resting days? 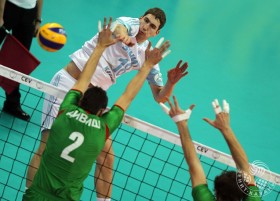 – My mom came to see me, we were sightseeing Kazan, went to the movies, went shopping….

-This season is hard, so you trying to use every break…

– Yes , this is an important remedy for games. If you dwell only on the volleyball, it is hard to work. That’s why we try to use all those little breaks to escape from volleyball.

– How are you feel physically?

– Fortunately, health is more or less normally.  We trying to keep it on the good level,  trying to find an antidote at pharmaceuticals and through the gym. 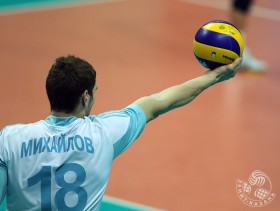 – How is Alexander Volkov? He has already started training for a long time, right?

– Yes, indeed, he is with the team all the time. This is very helpful for us, because Sasha is true leader and team captain. I believe that he will recovered quickly, he spends a lot of time in the gym and started working with the ball. This is very important for him and for us. The faster he will get in the full shape, the better for the whole team. Sasha is a very significant figure in the club.

– The second match with the German team is scheduled for February 28. When will Zenit Kazan fly to Germany?

– Now begins the most important games in the Champions League and the national championship, so there is no time to rest. We will fly, as always, in advance – February 26, to adjust to time zone, try out the court.

– Speaking of the hall. They say there is not very convenient because it is quite dark and court is very unusual. Is this true?

– Well, yes. In their hall the ceiling is not quite high, the local team has a little advantage on the serve. They have practice often in their hall so they used to the conditions. But, fortunately, we’ve played there, so we more or less know what to do.

– Finally a couple of questions about the Russian SuperLeague. Do you follow developments in the 1/8 finals?

– Yes, of course. During the break, I watched a couple of TV broadcasts and watched online some games. I’m curious to know how everything goes.

ITA: Omrcen leaves at the end of the season