Marko Podraščanin for WoV: “We have a debt to pay for that defeat in Italian Cup”

Marko Podraščanin of Lube Civitanova gave an exclusive interview for WorldofVolley in which he spoke about the current season and about the upcoming 2016 Men's CEV Champions League Final Four. 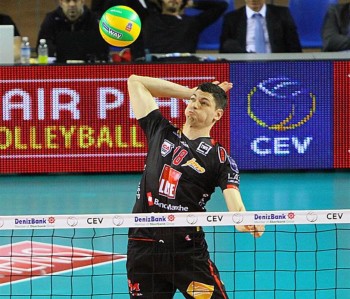 How would you rate this season of Lube?

“Everything is going pretty good so far. We have completed our two major goals – to win the 1st place i the Serie A1 Regular Season and to qualify for the CEV Champions League Final Four after 7 years.”

Are you satisfied with your performance in the current season?

“Yes, I am very satisfied both with my performance and with the performance of my team. From the very first training I’ve been having a great cooperation with our setter Micah Christenson, which means a lot to me during the games.”

As you have already said, Lube will play at the CEV Champions League Final Four after 7 years. What are your expectations before the decisive weekend?

“We have suffered some unlucky defeats in the previous editions of the CEV Champions League Quarter-Finals. Still, this season everything came back to us. We managed to triumph against HalkBank and to finally qualify to the final tournament.”

Lube will face Trentino in the CEV Champions League Semi-Finals. The current head to head score in this season is 2-1 for your rivals… Can you tie the overall score in the most important clash?

“Trentino have eliminated us from the Italian Cup, so they are in our debt, to say it on that way. They are a very tricky rival, a squad full of excellent players, but I think that a lot of things will depend on us. If we play at our ordinary level, I am convinced that we will qualify for the Finals.”

And if you do qualify for the Finals, who might await you there in your opinion?

“I expect that Zenit Kazan will triumph in the other semifinal, as they are the best team in Europe for the past two years.”