Igor Kolaković, former head coach of Serbia and Montenegro, Serbia, Iran and current coach of the Polish club Aluron CMC Warta Zawiercie, sent a significant message via his Facebook profile as a proposal to change a volleyball rule that, in his opinion, would make volleyball more interesting and easier to follow. 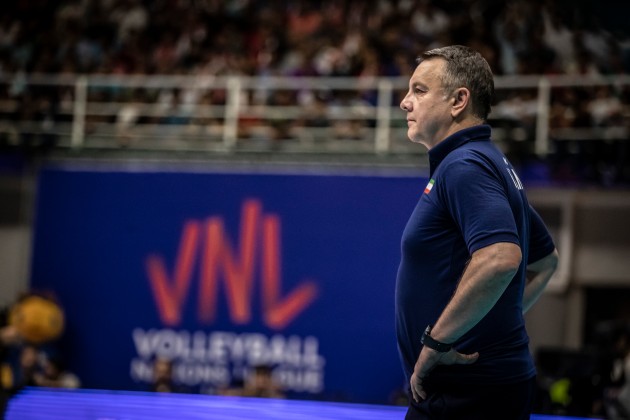 “Volleyball has long been a closed sport, as has gymnastics. Only those who played it could understand it, because of the complex rules, primarily in a technical sense.

Many rules have changed to bring volleyball closer to the spectators and young volleyball players, but for a long time, there have been no changes that will improve the game and prolong the action, which is certainly the goal, especially in men’s volleyball.

The revolution was brought about by a change from that boring volleyball when points were won only if you start the action with a service and it came to the point that today every action could win a point.

I will only mention some that existed while I was playing, which are from today’s perspective weird and a little stupid. For example, service can’t be received with fingers, underarms reception, if not almost ideal, was judged as a foul play. If an attack from the second line and the block touches the ball in that attack, the action continues even though the attacker commits a foul (stepped on the 3-meter line). Can you imagine?

Even today there are a lot of rules that I would change, which are ready for the changing. Volleyball goes ahead of its rules with its actions. Some of the current rules are killing volleyball. One rule just stings the eyes. It’s playing the second ball.

This rule is very irritating and is the subject of constant discussion in matches between coaches, players and referees.
It bothers me a lot when the referee decides to make a technical foul when trying to play the second ball. Today, the rules allow for the ball to be played with all parts of the body, to tolerate the first ball played in a technical sense, but I see no reason why the rule for the second ball played should not be changed.

I have long tolerated playing the second ball in training when we train situations 6 to 6. I am simply sorry that in this way I interrupt, often, a phenomenal action which in my opinion should end with the action of the players and not the referee’s decision. I keep telling the players that we are the avant-garde and that this rule will surely change because it is illogical… but it takes too long.

I don’t know what is gained by judging a technical foul (I don’t mean a retained ball) playing the second ball?
Well, the team has already been punished by the fact that the technically poorly played ball will not come to the ideal position for the attacker, so we allow the players to win a point with their action and not with a break and a referee’s decision.

Referees in volleyball today cannot have much influence on the result due to the use of the challenge system, but we should make their job easier by abolishing any technically foul ball. Not all referees have the same criteria for this situation and their decisions cause confusion among players and spectators and many times they can influence the final outcome. And I don’t blame them, they just try to follow the rule. In my opinion an illogical rule.

Volleyball should be understandable for all spectators, including my old aunt who watches the game because of me, and even more reasonable for everyone who wants to play for their enjoyment and to attract them with simple rules to be a part of a big volleyball family as recreationists, fans or future players,” writes Igor Kolakovic.

What’s your opinion on this matter?

NSSF KAVC International Tournament Kicks Off: How Did...

Different Variations of Games You Can Play with...

Volleyball has gathered stupid aspects because it is ruled by stupid people like Oldman Graca and Oldman Boričić! Then you have other silly people like this guy. By far the most stupid thing in volleyball is hugging twice a minute. That has to change, that has to be forbidden. Multiple other aspects have to change, but no one is interested in improving volleyball. I sent much more interesting proposals to people in the high hierarchy of volleyball, but no one cared. Some of those morons can’t even read an email! While world volleyball is ruled by stupid careless morons, it continue the road towards dying, with most games having 100-300 spectators. This blog is also uninterested in the improvement of volleyball.

Re: @Sorin Acela
The most stupid rule is each set has 25 points and teams only play serious game from point 15-16.
If sets had 15 or 11 points, they cared from first point, and didn’t cause spectators to sleep.

Re: @Sorah
That is very stupid too, indeed. If we do a simple analysis we can find a lot of other very stupid things. Another one is uselessly continuing the set when the score difference is 10 points. Who has recovered from that? (I mean in the senior games, not in the underage games.)

I agree with coach Kolakovic and the justifications he brings for changing this particular rule. I am convinced that most referees share his opinion too.