In all fairness to Serbia, they really had a great 2011 season! 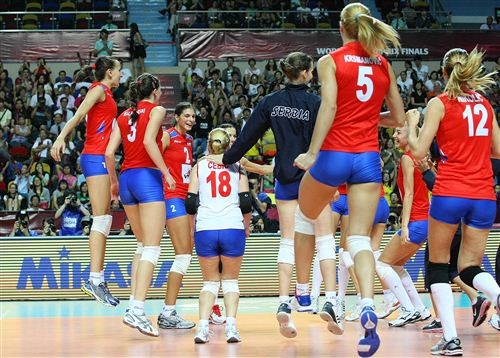 Uros, Jovana and the women’s team won major honors at the “Best Athletes of 2011” ceremony at the National Parliament in Belgrade last month. The annual ceremony was organized by Serbia’s Olympic committee.

Despite a limited playtime at the 2011 World Cup, opposite hitter, Jovana Brakocevic, was recognized as the Best Female Athlete. In case you didn’t know, Jovana – who currently plays in the  Japanese League – was named as the MVP of the 2011 European League and 2011 European Championship. She also won a bronze medal at the 2011 FIVB World Grand Prix – Serbia’s first GP medal.

Furthermore, the Serbian Volleyball Federation was awarded with the IOC Trophy “Sport and Social Responsibility”. The women’s team was named as the Best Women’s National Team. Just like the men’s team, they won the European Championship crown and also the 2011 edition of the European League. Even if they failed to taste success at the World Cup, Serbia’s women’s team totally displayed an unforgettable 2011 season

For the 6th consecutive year, Jovana and her teammates were honored as the Best and Most Successful National Team of Serbia

Side Dish: Tennis player Novak Dokovic was named as The Best Male Athlete, the water-polo team won The Best Men’s National Team award and Marijan Vajda, Dokovic’s coach, was proclaimed as the Coach of the Year.