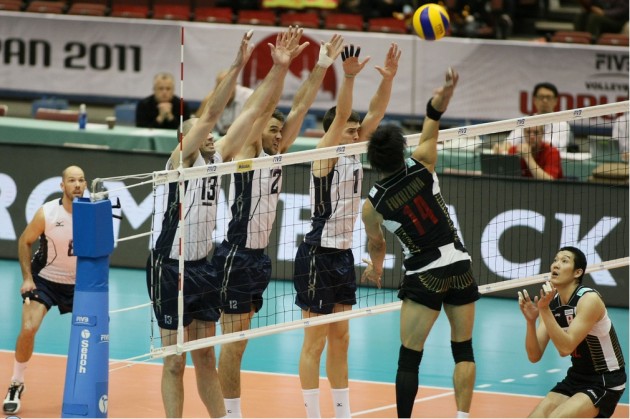 US triple block (Stanley-Holmes-Anderson) attempts to stop Tatsuya Fukuzawa along the way to a 3:0 win over Japan

The win made the U.S. record 4-4 for the tournament, while Japan slid to 2-6 with the defeat.

Matthew Anderson (19 points) and Clayton Stanley (14 points) starred in the triumph for the U.S. Anderson was named the most impressive player of the match.

Daisuke Yako and Tatsuya Fukuzawa were bright spots for Japan in the loss with 11 points apiece. The U.S. prevailed after a hard-fought first set that took them six set points to clinch. The Americans blocked well in the final set to secure the win. Japan came in with a two-match winning streak, after losing their first five of the tournament. The Japanese appeared to lose energy after the lengthy first set.