Volero ZURICH will play host to Poland’s Atom Trefl SOPOT for the opening round of play in the 2012 CEV Volleyball Champions League. The Swiss club did benefit from the interruption of the national league – that lasted for 4 weeks – to have a joint training camp with Azerbaijan’s Rabita BAKU and play a friendly match with ASPTT MULHOUSE. 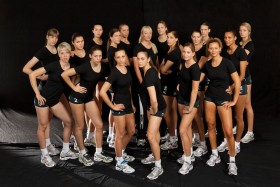 The roster of Volero is finally complete after three Serbian players, Bojana Zivkovic, Tijana Malesevic and Nadja Ninkovic, got back from the FIVB World Cup recently held in Japan.

“Although we were happy with the results of the Drawing of Lots, we know that our Pool is also very strong. Besides the favorite Dinamo Kazan, the Polish team will be a candidate for the second place in Pool C“, says Stav Jacobi, President of Volero.

The Polish team is one of the newcomers in the Cev Volleyball Champions League but their roster includes many players with a lot of experience. Amongst others the Polish team unifies six Polish, two German, one Turkish and two US national team players.

“Although SOPOT joins the Champions League for the first time we know some of their players from previous games in the European Cups or from matches played for the Women’s Top Volley in Switzerland” Jacobi adds.

“SOPOT is a very strong team and it is clear that we are the underdog in this opening match”. Volero is mainly focused on Izabela Belcik and Dorota Anna Swieniewicz as well as on two experienced middle-blockers, Corina Ssuschke-Voigt from Germany and Amaranta Fernandez of Spain, not to forget US American setter Alisha Glass.

“For us it would be an important benefit to win this home game”, head coach Svetlana Ilic notes, “because the game in Sopot will not be easier due to the support of their great audience”.

“The home game will be a very important match but not already the key for advancing to the next round”, Stav Jacobi adds. “With only ten days full preparation with the whole team this goal would be for sure far too much pressure for our very young team”.