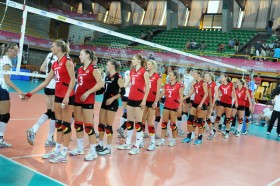 Germany prevailed from the start of the first set. After 10-7 lead, Germany’s players were relaxed, and were forced to pursue the lead, after a few attack mistakes. Kazakhstan’s girls played hard to tie the score at 19-19, and eventually secured the set win 25-23.

Germany opened the second set with a 11-7 advantage. With Hanke‘s incisive service, the team was able to hold on a good break. As the match grew in competitiveness, Guntor’s athletes had a positive defensive phase and better counterattack, tying the match with Germany (15-15). Guidetti’s athletes put on the pressure, with a crucial block. Germany broke the equilibrium with a point of the setter Hanke to win the set 25-23.

Germany grew in concentration and aggressiveness after a decrease of the Kazahstan’s power, to  win the third set 25-19.

The win gives Germany the first 3 points of the round-robin. The team will be back on court Saturday at 15:30 GMT against Argentina, while Kazakhstan will play hosts Italy at 18:30 GMT.