GP: Kiraly : “It was spectacle for volleyball” 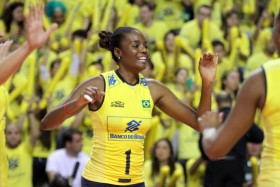 “It was a spectacle for volleyball,” USA coach Karch Kiraly said. “It was great to face Brazil in their home. They were the best team today and deserved the victory.”

The Americans had beaten Brazil in five of their last six meetings, their only defeat coming in last year’s Olympic final in London. Brazil coach Ze Roberto was restrained in his assessment of the match.

“It was an important test for our focus, for our confidence,” he said. “It showed us what we need to improve.”

Japan stayed on top of the Preliminary Round standings after a tough 3-1 win over last year’s bronze medallists Turkey in Ankara. They now have nine points from three straight wins, a record matched by China, Italy and Serbia.

Brazil have eight points and is the only other undefeated team after the first round of action in this year’s World Grand Prix. Five teams – Poland, Kazakhstan, Puerto Rico, Cuba and Algeria – failed to pick up a win in the first weekend.

Poland and Kazakhstan came close after five-set defeats to Russia and Argentina, respectively, which earned them a consolation point each, but Cuba and Algeria suffered their third straight 3-0 losses – Cuba to World Grand Prix debutants Bulgaria and Algeria to Thailand.

In the final match of the weekend, the Dominican Republic defeated the Czech Republic 3-1.