Lodz, Poland, March 17, 2012. Russia’s Zenit KAZAN ended this afternoon the winning streak of TRENTINO PlanetWin365, as the Italians – after seizing the title for the past three seasons – lost their semifinal match to the group mentored by Vladimir Alekno 1:3 (33-31, 20-25, 23-25, 17-25). TRENTINO gradually lost quality and consistency throughout the game while Zenit stepped up with a stellar performance of Maxim Mikhailov (pictured) and of wing spiker Evgeny Sivozhelez, so the Russians will be the challenger of host PGE Skra BELCHATOW once Europe’s throne will be at stake on Sunday at 5:30 pm local time. 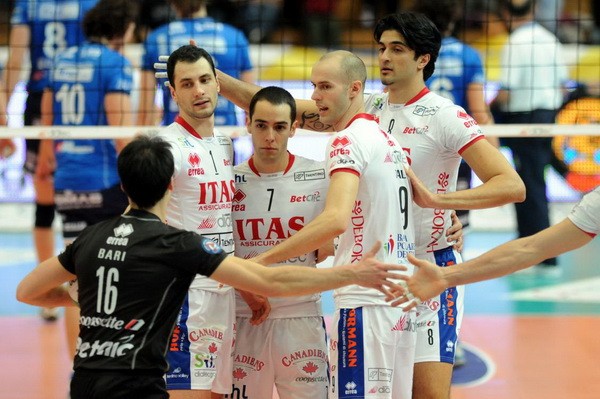 The second match scheduled for this afternoon at “Atlas Arena” was a remake of last year’s final whereby the guys of TRENTINO PlanetWin365 had seized the crown of Europe’s most prestigious league for the third consecutive season, and in front of their own fans in Bolzano.

TRENTINO did show up with some special jerseys – featuring a question mark – as they were somehow obliged to cope with the Polish legislation and drop out their main sponsor, a betting company, whose advertising is not allowed by the local government. As for Zenit, last year’s runner-ups were ready to fight to get back the trophy they had brought home in 2008 – as the final four was held in Lodz for the first time – by the time the club was still named Dinamo Tattransgaz. The game was much anticipated also because Cuban-born star Osmany Juantorena – one of the pillars for one of the greatest winning series in Volleyball history – is allegedly going to move to Kazan next fall.

However, as recalled in yesterday’s press conference by Zenit coach Vladimir Alekno, “Juantorena here plays for TRENTINO and as for us, he will be standing on the other side of the net, so what’s next does not count at all”.

Embarking on a quest for a poker whereby they would emulate the glorious CSKA MOSCOW from the ‘80s (even though by that time the Champions Cup did feature only the national champions), the Italians immediately tried to impose their rhythm with a block of Czech opposite Jan Stokr that did call for the first technical time-out (8:6).

Zenit got past in the score on an error of TRENTINO captain Matey Kaziyski (9:10) and then stretched the lead by stopping an attack of Stokr (10:12). Kaziyski and middle blocker Emanuele Birarelli quickly restored the balance (12 all) but Zenit still set the pace by the second mandatory stop (14:16).

The “Atlas Arena” was still completely packed and the always wonderful choreography provided by the local fans contributed a great ambiance even though the local heroes were no longer playing on the court; some 300 fans from Trento – who had traveled to Poland by plane, bus or car – also did their best to support their own guys and so did a small Russian crowd from the capital city of Tatarstan.

TRENTINO drew level again at 19 all and then cruised to the front by claiming the next rally, but the match was evidently going to be a real battle from the first up to the last minute. Juantorena blocked Mikhailov for the next deuce at 21; the Russian opposite – MVP of the 2011 FIVB World Cup in Japan – contributed a set ball for his side at 23:24 but Stokr promptly responded to the call of setter Raphael, before Zenit got a second chance to go for the 0:1 with Yury Berezhko. Alexey Cheremisin joined the game by this moment but he served long, before Sivozhelez made it 25:26.

Juantorena fended off the next set ball, Volkov sent it to the net and TRENTINO got its first chance for the 1:0. The Italians proved once again to be mentally strong as after many mistakes (especially from the serving line) for both sides, they eventually sealed the final 33-31 with a counter attack of Juantorena.

The score stayed incredibly close also in the opening of set 2 with TRENTINO dictating the pace by 2 points at the first technical time-out; the Italians showed more consistency than their opponents, always well anchored by Kaziyski and Juantorena, and they gradually stretched their leadership (14:10). However, Zenit fought back once again (14:13) and after tying the score at 15, went to the front (15:16). Afterwards another terrific battle unfolded, with again all players lacking efficiency in serving, but Zenit eventually showed off its very best to change gear (20:24) and bring it home with an ace of captain Alexander Volkov.

Everyone had predicted a very long match for this semifinal and the teams were living up to all expectations; after a close start, Zenit opened a cushion chiefly via its star Maxim Mikhailov (5:8). Apparently TRENTINO was struggling to find back its best play but still head coach Stoytchev had not felt he shall have gone for one or more substitutions. His guys got nevertheless quickly back on track (9:9) even though TRENTINO was missing today the support of Juantorena’s service (quite many mistakes were registered for him in this fundamental). Stokr and Kaziyski re-asserted their intention to go for a fourth consecutive crown (13:11) before an ace of Mikhailov was unsuccessfully “challenged” by TRENTINO (13:13) and the Russian star contributed also the next point for the 13:14.

The Italians coped with a very difficult situation as they scored two in a row to make it 16 all, as Sokolov had replaced Stokr as opposite player. TRENTINO got back to the front at 20:19; with a couple of blocks on Kaziyski Zenit turned the charts around (20:22) but right by the end of the set Mikhailov missed his service (22:23) while TRENTINO responded with a block for another tie. Sokolov joining today’s flurry of serving errors brought up a set ball for Zenit and another mistake of the Bulgarian opposite did help the Tatar quest paving the way for the 1:2.

Jan Stokr was back in action for the start of the fourth set but the plot of the game did not change much with continuous side-outs finalized by both sides and TRENTINO enjoying the narrowest margin at the first mandatory stop (8:7). Evgeny Sivozhelez was today’s scoring machine for Zenit while TRENTINO was lacking the usual consistency of its stellar trio (Juantorena, Kaziyski and Stokr, 9:12). After a time-out asked by Stoytchev, Nikolay Apalikov served an ace and to make it 10:15 Zenit won its first “challenge” on a winning service of Mikhailov that was initially called out by the referees. It looked like the fate of the game was already determined as TRENTINO trailed 10:16 by the second technical time-out and the Italians could not find their way back into the game although they showed some courage and determination to defend their pride until the end. Zenit could eventually qualify for the last act of the Champions League for the second time – after 2008, so Lodz seems to be quite a good omen for the Tatars – and the game ended with an ace of Maxim Mikhailov (17-25).

“We did not use our opportunities, especially in the second half of the third set, and if you do not play your best – as we did today – against a strong side like Zenit KAZAN, the final outcome of the game cannot be different than this. We did not reach good ratios in service, block and attack” said Radostin Stoytchev, evidently disappointed with the result. Asked about the poor performance of Osmany Juantorena, he said: “We always play as team, so we win and lose as a team. As for the future of Osmany, this is not a topic that I would like to discuss. And about the challenge system, I still did not understand that well the way this technology works, but it seems to be a good tool for Volleyball, especially because we – players and coaches – are more relaxed knowing that some decisions of the referees can be challenged”.

“I do not want to talk much about today’s game because the final of tomorrow is the most important moment of this weekend. Anyway, I am certainly happy with the result, but I know that to edge PGE Skra we will have to deliver a perfect performance. The challenge is certainly a help, not just because we won one point, but especially since it takes some pressure away from the players and the referees, who are so cooler and can better control their emotions on the court” stated Russian mentor Vladimir Alekno.