Today, in Lodz, "Zenit" will meet in the semifinals the European champion club of the last three years - the Italian "Trento" ". On the way to Poland we talked about the upcoming match with the captain of the Kazan. Let’s recall, 27-year-old middle blocker of Russian national team missed almost two months after surgery - to remove fragments of cartilage from the knee joint, and only recently returned to team. With this injury, we began our conversation on the plane that delivered the "Zenit" from Kazan to Lodz. 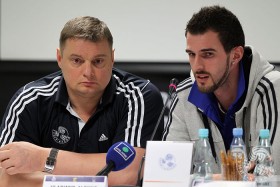 – Okay. Of course, not yet fully recovered: I still have weak ligaments, there is fluid in the knee.I am ready about 66 percent.

– When you are injured, doctors’ predictions were disappointing: according to them, you dropped out of action until the end of season, and there was risk to miss the Olympics in London. What allowed you to return to the court before?

– The operation passed successfully – I am very pleased with the doctor who did it. Then I had a good rehabilitation in the club. Plus my parents supported me, and my own desire to return. Within three to four weeks beyond the volleyball court, I can say , I was “dying”. I can not live, just sitting – I definitely need to train and play.

– The upcoming opponent for the semi-finals you know from the first hand –  last season you played in Italy for the “Cuneo”. With them you won “Trento” in the final match of the Italian Cup and  in the final of the Supercup…

– And both times 3-0. I think If “Dinamo” Moscow did not shut down our way in the “Final Four” of the Champions League , we would beat “Trento” again. Injury of both major spikers prevented us from fight for the championship gold in Italy. Parodi injured his knee, and Wijsmans played with a injured ankle … And without two spikers , win at this level is impossible. Especially when there is no room for error, because last year the final of the Italian championship consisted of a single match.

– In teamwork: these volleyball players were together for many years. A game of “Trento” defined by two strongest spikers in the world – Kaziyski and Juantorena. Each year, many clubs are gaining some new members in an effort to become even stronger and win “Trento”. But that way is impossible to reach the goal. Each team must play together for several years to reach their full potential.

– “Zenit” have much updates in this season…

– Indeed, a completely new team. But if we win the semi-finals, we should not take it like some sensation. And if we lose – this will not be anything supernatural too, “Trento” is “Trento”.

– Is it unfair that the main favorite of the Champions League and “Zenit” will meet in the semifinals?

– In any case, if you want to win the tournament, sooner or later you have to win, “Trento”. In the semifinals or the finals – there is no difference. Everything will depend on how “Zenit” will play . For example, in one of the last training, we had a very interesting exercise, after which I said: “If we play as well as just practicing,” Trento ” wouldn’t be able to score 20 points per set.”

– What kind of mood you had when you returned to Russia, having played the season in the Apennines? I remember that after the defeat, “Cuneo” against “Dinamo” in the quarter finals of the Champions League, you said that you went in  the Italian club to win the Champions League …

– That target was not the only – though, of course, i wanted to win the Champions League very much. But still wanted to change something in my head, look at the Italian mentality: how people train,  how they relate to volleyball, how they live … I saw how Grbic, Nikolov, Mastrangelo works – seems they know everything about volleyball but they train very hard. Constantly talking about volleyball, always wanted to win, even in training they are worried for each lost ball. In general, I am very pleased with the season, held in the “Cuneo” – for me it was a big step forward. I think i stayed too long in the “Dinamo” and even stoped feeling progress.

– Many players in “Zenit” wear basketball shoes – in particular, the nominal line of NBA superstar Kobe Bryant. Are they better than the models that are designed specifically for volleyball?

– Yes, and much more. And the “Kobe” – one of the most convenient. They have soft soles that is very important for often jumping volleyball players. They have more interesting colors. It’s a shame that we are forbidden to play in them in the national team. But the legs for volleyball – it’s almost the main working part of the body. If i put on shoes from national team – my feet will “die” instantly.

– Because you are not yet fully recovered?

– No, the knee has nothing to do with it. Just in uncomfortable shoes , feet start to hurt instantly, and you’re already moving quite differently on the court. It’s not a coincidence that is more than half of the volleyball players are wearing different brand. We need to understand what is more important for the team. Maybe we’ll find a way out and give up at least on the part of the contract, which relates to shoes. It is necessary to think of something, because it is impossible to play in those shoes.

Traitor or not, Russia will miss Muserskiy’s...