Beograd, Serbia, March 16, 2012. As per the results of a research carried out by the Ministry of Youth and Sports, volleyball is the sport number one in Serbia’s schools ahead of football and basketball. This is actually mainly resulting from a special project worked out by the Volleyball Federation of Serbia, named “Volleyball tomorrow – Volley balls for future victories”, whereby starting from 2008 all of Serbia’s 1’800 elementary schools were gradually provided with Mikasa balls. 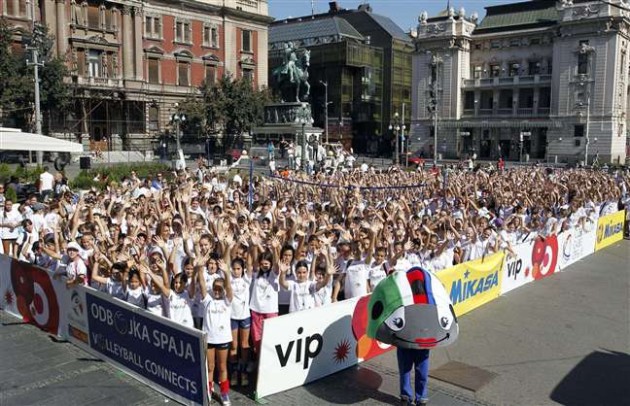 Volleyball is certified as most popular sport in Serbia’s schools

This action was promoted in cooperation with the general sponsor of the Volleyball Federation of Serbia, Vip mobile, and with the support of Serbia’s Ministry of Youth and Sports.

Additionally, last year as Serbia played host – together with Italy – to the final round of the 2011 CEV Volleyball European Championship – Women, the Volleyball Federation of Serbia and Vip mobile organized a special “street volley” competition, the “Vip VOLI Cup” (see picture), specifically addressed to young girls aged from 9 to 15, who were subdivided into two age groups, category I (from 9 to 12) and category II (12-15).

The event was joined by more than 2’000 girls and Vip mobile did also provide special awards to the best teams; starting from such positive results, this street volley event will be yearly organized in Serbia to involve as many youngsters as possible in the sport.

Another project followed in October 2011, this time in cooperation with the Wiener Städtische Insurance Company, the title sponsor of Serbia’s first division, and the Association regrouping all clubs competing in the Superleague.

This action, placed under the motto “Sports class – Straighten up!” supported also by the Ministry of Youth and Sports shall improve the children’s posture and educate the young generations about the problems that may descend from spinal deformities.

It also stresses the importance of a healthy lifestyle and the practice of sports for the physical and psychological development of all children, thereby involving also their parents. So far 9 classes have been held in the cities of Subotica, Smederevo, Klek, Kraljevo, Požarevac, Užice, Beograd, Kragujevac and Lajkovac, for a total of more than 3’000 pupils in attendance.

More actions shall follow in the future to help as many children as possible opt for Volleyball and make sure this remains the most popular sport among Serbia’s young generations.