MC-Carnaghi Villa Cortese will participate in the final four of Champions League in Baku, on Saturday and Sunday. 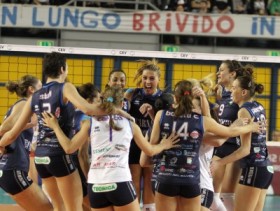 Berg and her teammates for the first time have the opportunity to be among the best in Europe, together with Fenerbahce Universal Istanbul, Dinamo Kazan and RC Cannes.

The president of the team, Aliverti, will represent Italy and all the women’s volleyball in 52. Champions Cup.
The competition in 2001 has changed the name, becoming European Champions League, thus getting even more charm and value. The last Italian team that won in the finals of this competiton in 2010 was Lucia Bosetti Bergamo.

Two teams that will have its debut in the Final Four this year in Baku are MC-Carnaghi Villa Cortese and Dinamo Kazan.
Among four teams, Cannes is the only one that managed to win the title.
The French team, and the semifinal opponent of the MC-Carnaghi Villa Cortese, won the Champions League in 2002 and 2003. Fenerbahce Universal Istanbul, led by Olympic champion Ze Roberto, is the only team that participated in the Final Four 2010.

BUL M: Is there a healthy middle...

Bernardo Rezende: We are happy that we...