Zenit failed to finally beat Belogorie in this season and stayed out of the CEV Champions League finals. 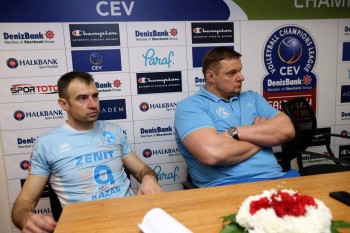 Vladimir Alekno, head coach of Zenit, was obviously sad with the outcome, but wished all the best to Belogorie in the final battle.

“Volleyball is like mathematics and if you make as many mistakes as we did today, you end up losing, so this defeat does not come as a surprise to us. At the same time I would like to congratulate the team of Belogorie and wish them the best of luck for the final where we hope they will win the title and carry on the Russian supremacy in this competition” – said Alekno.

Nikola Grbić added that team has to forget this game as soon as possible and focus on domestic league.

“That was the fourth time we played Belogorie this season. We had lost three matches in a row but we always played in Belgorod, so this time we were hoping to change this negative trend since we were playing on neutral ground,” commented Zenit setter Nikola Grbić. “We eventually did not succeed in doing this and could not display our best. We have to regroup, get back our confidence and start fighting for the title in the Superleague which is the last trophy we can have a shot at for this season.”

Live photo gallery from the events in the Turkish capital is available here.

CL M: Gennady Shipulin – “We are ready to take gold”

CL M: Celebration in Ankara, Halks are in the finals!