Belgium will face Netherlands in the final of the Grand Prix Group 2! 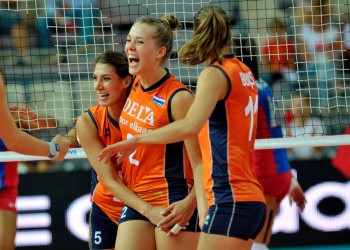 In the second semifinal Dutch team has defeated Puerto Rico 3-1 (22-25, 31-29, 25-20, 25-12). This was a true team victory of Netherlands as six players finished this match with double digits in points (Plak 13, Steenbergen and Pietersen 11, De Kruif, Buijs and Flier 10). On the other side, Karina Ocasio was the best scorer in Puerto Rico with 24 points.

So, we will have a Benelux derby in the big final, which is scheduled for Saturday at 20,15 (CET). Belgium or Netherlands will advance to the Final Six of the Grand Prix 2014.

WoV in Florence – The Purple City