His dream is to play in the senior men’s national team and to win the Olympic gold medal. Luka Basic, captain of France during the 2014 CEV U20 Volleyball European Championship - Men in the Czech Republic and Slovakia, has volleyball in his genes, because both his parents played this beautiful sport on professional level. 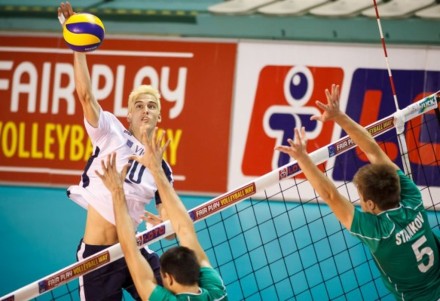 His father Veljko Basic was born in Bosnia and Herzegovina and played 200 times for Yugoslavia.  He started his career in the Croatian club Mladost ZAGREB where he won the top league of former Yugoslavia six times and played in finals of the European Champions Cup two times.  In 1987 he moved to France, where he played first in Mulhouse and then for nine seasons in Rennes where he was became coach.  Later he got French citizenship and stayed.  “My parents were born in Bosnia and Herzegovina, but I was born in Rennes, France,” explains the 201-cm-tall Luka.

Luka started to play volleyball at the age of six and never tried another sport.  “It was all clear, because my parents are volleyball players.  I am happy that I chose this sport,” said the wing spiker with the number 10 on his shirt.

His father stayed in the volleyball world after finishing his playing career.  He coached at RENNES Etudiants Club, PARIS Volley, TOURS Volley-Ball, the national teams of Tunisia and Turkey and currently is the mentor of one of the best club teams in Tunisia – Esperance de TUNIS.  “We speak a lot about volleyball with my father, of course.  He always wants to help me with advice and we have a very good relationship,” added young Basic.

Luka who was born on January 29, 1995.  In his junior years, he played volleyball in his hometown Rennes and this summer he signed a professional contract with AS CANNES from the top-tier Ligue 1.  Basic believes in his good future.  “I want to play volleyball on professional level, I hope that I will play for the senior national team and my dream is to win an Olympic gold medal.  I think these are normal goals for all volleyball players,” said Luka.  His idols are Russian spiker Sergey Tetyukhin and the two superstars from – Matey Kaziyski and Osmany Juantorena.  “I like the way how they play and I hope that one day I will be like them,” added Basic.