Tokyo Broadcasting System Television (TBS) has invested a great deal in the 2014 FIVB Volleyball Women’s World Championship and will ensure wide access to the competition for Japanese volleyball fans with up-to-the-minute television coverage of their national team's Italian adventure. 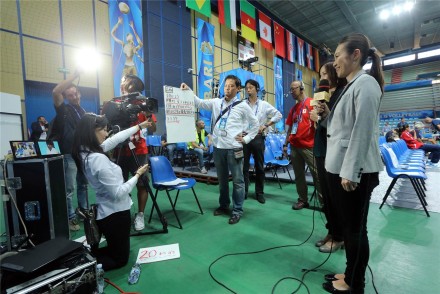 What is the reason behind the Japanese media’s great enthusiasm and interest in this World Championship? Is volleyball really such a popular sport in Japan?

TBS reporter Yuriko provided her answer. “It is definitely well supported,” Yuriko said. “Children start playing volleyball at primary school. When the Japanese team is competing, the audience share rises sharply. I do not know if it is the most crowd-pleasing sport in Japan, but I am sure that after winning the title in the 1964 Olympics, it has been turned into a religion.”

“In Japan, it’s a sport which is surrounded by a magical halo,” Yuriko added. “Fifty years have passed since that victory. After decades of weak performing and results, the Japanese team is finally back at the top again.”

Going into the tournament as the World Grand Prix runners-up and favorites to win pool D, the Japanese team was stunned by an opening 3-2 loss to Azerbaijan on Tuesday afternoon. Nevertheless, Yuriko believed that the love and support of the fans would never decrease for the national team.

“We never lose heart in the face of defeat. Azerbaijan’s victory was a surprise, but we will not give up,” Yuriko said. “We are trying our utmost in order to win it. That is our main achievement. This defeat offers the opportunity to restart and regain our focus.”

As Yuriko expected, the Japanese recovered quickly enough to beat Belgium 3-1 on Wednesday for their first win at the prestigious volleyball tournament.

“I believe all the Japanese supporters will cheer on the team until the end of this Championship,” Yuriko said.

Molten and NORCECA to continue their association