The Mayor of the city of Anaheim Mr. Tom Tait welcomed the 226 delegates from 196 countries at the opening ceremony of the 33rd FIVB World Congress chaired by Mr. Jizhong Wei, President of FIVB. 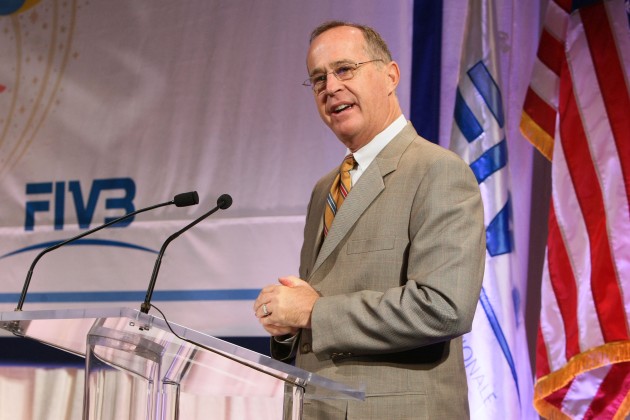 Mr. Tait called the city of Anaheim and the area of Southern California as the home of volleyball and beach volleyball teams of United States while remarking on the rapid growth of volleyball across the globe which he considered the second most practiced sport in the world.

“We are very proud of the performance of our national teams at the recent London Olympic Games for a country where more than 46 million people practice this awesome sport in the United States.”

Mrs. Anita DeFrantz, a lifetime member of the International Olympic Committee who is its first-ever female vice-president, also expressed her best wishes to the participants on behalf of IOC President, Jacques Rogge.

“On behalf of Mr. Rogge and myself I wish you the best during this congress where you will be electing new leadership”, Mrs. DeFrantz said.

She was followed with welcome speeches by Mr. Larry Probst, chairman of the U.S. Olympic Committee and Mr. Douglas Beal, CEO of Volleyball USA.

“The USOC is very proud to have all delegates from the national federations of FIVB and I hope you can have a productive congress”, Probst said.

Beal called Anaheim a lovely land that can turn everyone back to their childhood days in Disneyland and referred this is the third time USA hosts the FIVB World Congress with the previous ones in Long Beach, California (1984) and Atlanta (1996).

“I want to take this opportunity to pay tribute thanks to Mr. Jizhong Wei for his leadership and the way he has conducted FIVB during the past four years”, he said while receiving a big round of applause from the delegates.

A total number of 262 delegates from 196 federations (including eight proxies) were confirmed in attendence.

ITA W: Curtain up, here is the new player, Valpiani