Diego Scroca and Julio Gimenez, have equal teams and it will be a difficult closure in Men Series A2. The advice of coaches is a good training and a great offensive power. 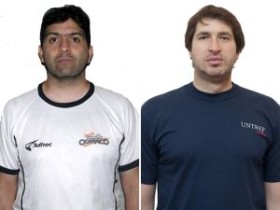 “We are very similar, because of that the team that plays better will win. There is no way  back.”
The definition of Diego Scroca about the final is short and concise. He added: “These games are different as was the semifinal against Obras de San Juan. They had several chances to put the series 1-0 in their favor, but there one ball changes everything.”

With regard to the hosts, volleyball coach of Untref explained: “At this level, where the team is so great, there is no pressure. Both teams are good and  serious. “

Moreover, Julio Gimenez also provided his views on the game and said: “The expectations are the best. In fact, our first idea was to finish in the top four in the contest. We are now in the final and this team deserves the best, because it is good and plays very well together. “As for the game against Untref, he agreed that both teams have strong offensive power and explained what is the key of the game: “It will be very important to have concentration in the game. The fact is that we take advantage in other games with the attack but now there is no difference in that respect, so we have to rely on good management of ball. “

Finally, the caoch of Untref again referred to the social project and the effect of team leadership.
“The title will be helpful and it will attract attention of people. In Argentina, a championship is always helpful, “he said.

The previous sensations, feelings, technical and tactical fundamentals, Scroca Diego, Julio Gimenez, Untref and Ciclista. All of these protagonists are included in one event: the final of the Men’s Class A2. The first meeting will define the best of the category on Saturday starting at 21.30 h. On Sunday they meet again, at the same time. Both meetings will be held in AFALP.

ARG: Boca Juniors and Estudiantes de Parana can define their series in the third match.