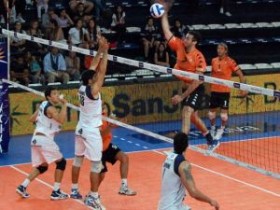 Union de Formosa receives Boca Rio Uruguay Seguros at 21h in stadium Cincuentenario. The hosts came from the victory over Gigantes del Sur with 3:0, and want to keep on winning in order to get on the second place. Meanwhile, “xeneizes” are the fifth on the scoreboard  and also won last weekend.
At the same time, Lechuzas Villa Maria will have a difficult game against MSM Bella Vista in the relegation zone. Cordoba needs to add to get away from the last position it shares with JujuyVoley.

The match  between Drean Bolivar and Catamarca Voley will be broadcast live on ESPN+ at 21h.
The “Eagles” are still secure as scorers with 47 points despite their fall loss against Sarmiento Santana Textiles of 3:1. On the other hand, CatamarcaVoley already has already secured its place among eight teams and wants to go up.

At 22h in Aldo Cantoni, UPCN Volley  receives Buenos Aires Unidos in one of the matches of the round. San Juan is the third with a streak of five straight wins and wants to raise up. For its part, Mar del Plata, that lost its last chance, seek to recover from the lost game.