Argentine receiver talks about his passion for cooking for World of Volley. 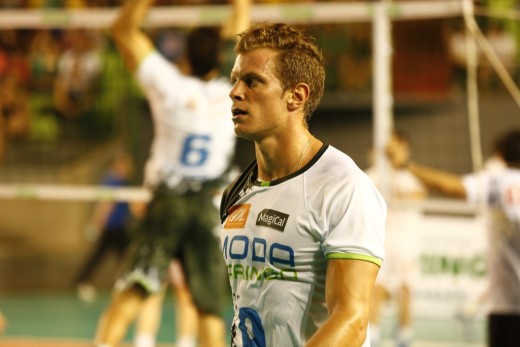 If you eat a barbecue (“asado” in Argentina) on Quiroga’s way (it’s not just Rodrigo’s style, but somewhat of family tradition) it would be juicy. It’s a legacy of his father:

“It’s like we have a school for proper making a barbecue in my family” – said Quiroga, who also, laughingly, explained that he likes to make it with wood, because he needs two hours to light the fire with coals. “I’m not a great friend of coal” – he added.

Unlike many people who seasoned the meat with lemon, ‘chimichurri’ (typical Argentine flavoring) and other species, the player of Moda Maringa, only puts salt because he has got used to it and he likes it that way. In addition, he said that his barbecues lasts about an hour and a half to be cooked, and he puts little firewood under the grill.

‘I’m not one of those who eat the meat overcooked. So if you like it that way, you will have to wait the end of my barbecues to eat’, warned Quiroga.

The former captain of Argentina’s National Team considers that ‘the ritual of making barbecues is one of his favourite hobbies, and he said that really likes doing it’. But he’s not only a chef, instead he’s a complete organizer:

‘I like to do barbecues, organize it, buy the meat and invite friends and family, that is always nice’.

That is a moment that he loves and there is something in particular that he enjoys beyond eating:

“The traditional folklore of lighting the fire is something that I like the most”, said Quiroga who was born in San Juan, where he played in Obras Pocito, club that have just promoted to the top League of Argentina.

Maybe this Saturday, after the seventh date of Brazilian Superliga he can do a barbecue to celebrate. On that occasion, Moda Maringa will face UFJF, who lost 3-1 with Funvic Taubate on its last match. Rodrigo’s team wants to continue the winning streak and climb the standings, but they need to defeat the team where Thiago Gelinski and Lucão play. The game will be this Saturday at 9:30p.m. (local time).

To read more news from this country click on Argentina.

SRB: Champion got new sponsor, on Saturday “Festival of volleyball”

Brazil traveled to Kyoto by train