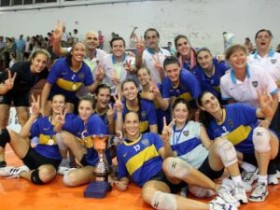 Its attackers Jimena Perez and Brazilan Arianne Tolentino, along with Sabrina Segui, were the most effective in block – defense.

In the first set Boca took the lead of 4:1 and since then controlled the game. After 4:8 “Xeneize” went to 1. technical timeout.

Then, Arianne Tolentino showed an excellent performance and her team scored 21:11.  So, Boca easily won the set with 25:13.

The second set began with an excellent performance of Brazilian Tolentino, well attended by Segui.
The effectiveness of the main attacker and scorer in the league led Boca to 4:1, at which time Estudiantes got better in defense, scoring 8:10. However, the team led by Eduardo Allona with two consecutive points again took the lead.

Tolentino, Jimena Perez, Mariangeles Cossar and Maria Eugenia were great in block – defense. So Boca again took the lead and (13:9 and 19:14) closed the set with 25:18.

In 3. set the block and defense of Estudiantes did not stop the speed of their rival. Until the first technical timeout Boca scored 8 points, and until the second was leading by 16:10. The effort of Estudiantes was not enough, so Boca won the set with 25:17, which allowed them to take the second title in a row.