The Vice-Governor of San Juan Province, Mr. San Juan Marcelo Lima welcome at the Province Legislative Hall the President of the Argentine Volleyball Federation, Mr. Juan Antonio Gutiérrez and San Juan Volleyball President, Mr. Jaime Bergé. The meeting ended with an important project of official support to province Volleyball closing the tour that FeVA President did all over the province. 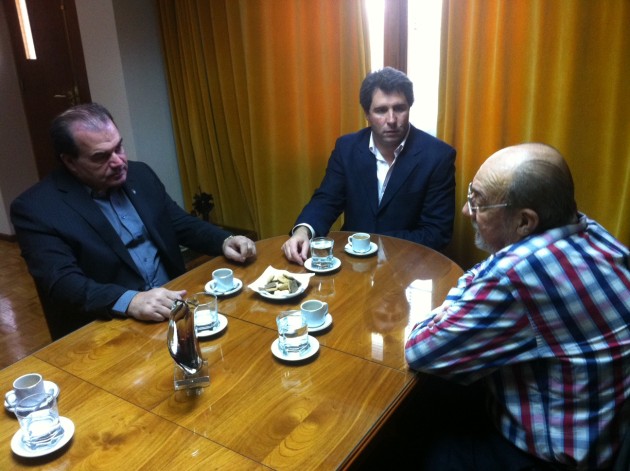 Gutiérrez, Lima and Bergé at the Province Legislative

Lima pointed out the importance of Volleyball for the province and emphasized that the Government will support all Province and National activities held at their region. “Sport is vital for the development and we understand that volleyball has a great national and international impact that is very strong and interesting for any management“.

Naming the great achievements of their team, UPCN Vóley at national level (twice National League Champion), Lima also expressed that they will support all activities carried out by FSV President Jaime Bergé, “a very important official with responsabilities that he carries out with commitment” he added.

FeVA President, Juan Antonio Gutiérrez thanked the meeting and engaged FeVA effort to back up San Juan Volleyball Federation in all events they decide to organize to develop volleyball in the province and adviced that the National Teams will always be part of any competition they are invited to. He also mentioned that he hopes that San Juan province adds to the national effort of bringing beach volleyball to the province in the new facilities just inaugurated in the capital city by the San Juan Volleyball Federation.

The meeting, organized by the entity lead by President Jaime Bergé, was without any doubt a great support for volleyball on the same day that the Province Sport Secretary, Juan José Chica also mentioned the impact of volleyball all over the province.